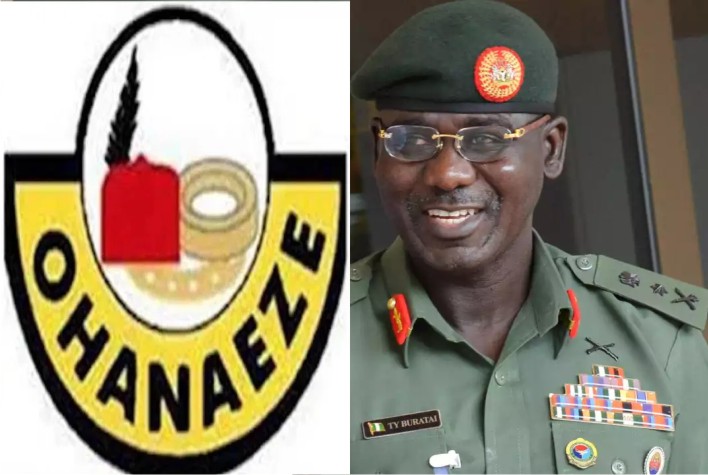 Ohanaeze Ndigbo, the apex Igbo Socio cultural organization, on Wednesday told the the Chief of Army Staff, Tukur Buratai that he lacks the powers to declare state of emergency in the southeast.

The organization was reacting to a statement allegedly made by Mr Buratai wherein he was quoted to threatened to impose a state of emergency in the southeast.

Two officials of the Department of State Security (DSS), were killed last month in Enugu when members of the Indigenous People of Biafra (IPOB) were killed in a clash with security agents in Enugu.

Also some members of the proscribed group were also killed in the said clash with many injured and others arrested.

In the wake of the incident and with tensions high in the region especially in Enugu, there were unconfirmed reports of security agents, especially Military officers, being attacked in Enugu.

Reports also emerged that the Chief of staff, visibly angry at the attacks, threatened state of emergency in the region if the attacks continued.

Ohanaeze in the statement signed by its Publicity Secretary, Uche Achi-Okpagha noted that the Chief of Staff has not come out to deny making the statement till date.

“The attention of Ohanaeze Ndigbo Worldwide has been drawn to a statement credited to the Chief of Army Staff, General Tukur Buratai, threatening to impose a state of emergency in the South East if Governors of the states allowed any further attack on security forces in the states, a statement he has not denied,” the statement said.

The group noted that while it decries violence in any form in the states, it takes particular exception to an open threat and warning to South East governors who by the country’s constitution are chief security officers of their states but are lame ducks in practice as all security commands come from Abuja.

“Ohanaeze Ndigbo finds it particularly provocative for General Buratai to issue such a warning to governors of the South East where relative peace prevails while he has not done the same in the North Central, North West and North East which have become theatres of war and where army posts and bases have been subjected to incessant attacks by the Boko Haram, ISWA/ISIS, bandits and Fulani herdsmen, killing and maiming Nigerian soldiers,” he said.

The group also wondered where the army chief derives the power to issue such a threat which under the country’s constitution can only be carried out by the National Assembly on demand by the President.

“It is highly surprising that an army chief who was watching as the governor of Katsina State was negotiating and taking pictures with armed bandits would turn round to threaten to impose a state of emergency in states where unarmed citizens are agitating against the harsh and inhuman conditions they have been subjected to by their country.”

Mr Okpagha said that Ohaneze believes that the threat by General Buratai is a vindication of the belief that the South East is being regarded as a conquered territory, exemplified in the army of occupation stationed in the area.

“It is also a glaring example of the reckless impunity of public officers and a tacit manifestation of the vacuum in governance at the Federal level.”

2 thoughts on “Ohaneze to Buratai: You lack powers to declare State of Emergency in South East”