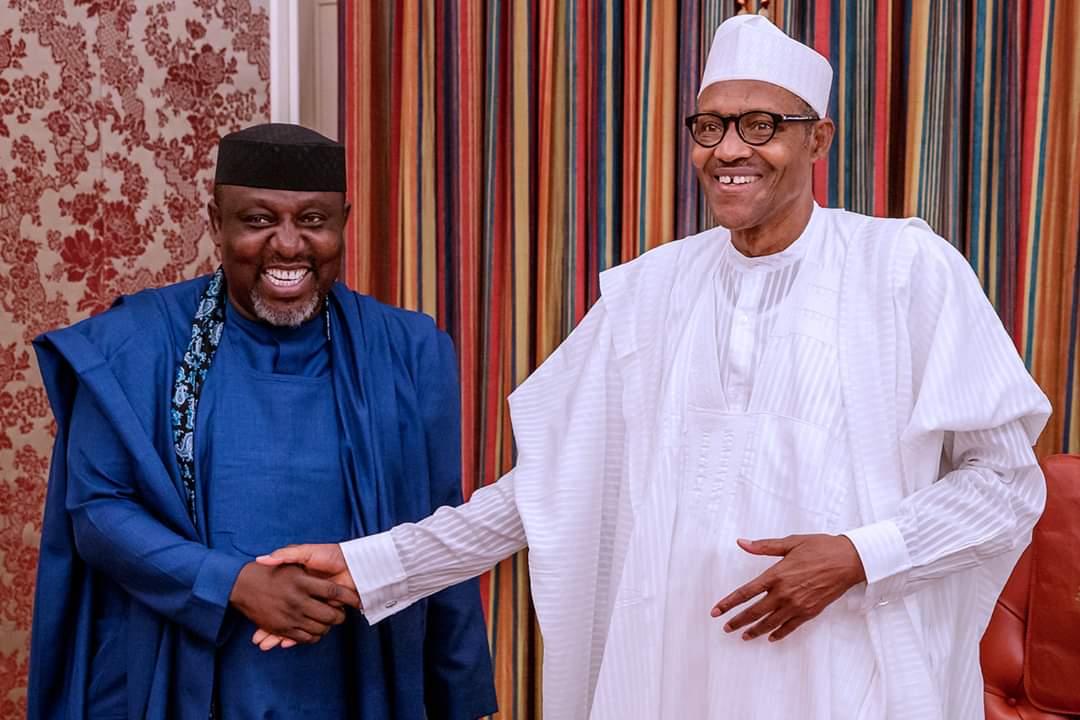 Governor Rochas Okorocha of Imo State had a closed-door meeting with President Muhammadu Buhari on Monday at the Presidential Villa in Abuja.

Speaking further concerning the fate of the South East, he said “The people of South East are important and should be treated as such.”

“This nation will not be properly balanced if South East is not carried along properly in the affairs of the National Assembly. Nobody seems to be talking about the South East, it looks like the South East doesn’t have a place anymore, that is wrong, politically speaking and that is not good for APC.

“Because there is going to be a bigger APC after President Muhammadu Buhari must have left the seat. My fear now is that APC might have a serious setback in 2023 because the Oshiomhole’s led executive is actually turning APC into a regional minority party which shouldn’t be because of his mistakes.

“Right now in the whole South East, we don’t have an APC governor. So if there is any discussion in Nigeria now within the APC governors and President Muhammadu Buhari, there would be nobody from the South East.

“They shouldn’t think about giving South East, whatever position for giving sake. You can’t just wake up and give them any position. South East is a key primary zone in this country and if we don’t get the number one seat, we should get the number two seat.” he said

Asked why his party is not making any case for his certificate of return, he said “I won’t be surprise because, of course, you know the imposition we suffered in the party. When you say the party, you talk about the leadership of that party. I don’t have problem with the Working Committee of that party, I only have problem with the chairman of that party as he took it upon himself to do the wrong thing against me for just no cause and to fight a battle that he can never win.

“No, he is the one that is behind all these impositions, can you imagine, as I speak to you the APC candidate in Imo State did not win a seat, APC does not have a councilor in Imo State now, it does not even have a House Member.

“But the AA party has eight seats in the Imo State House of Assembly, two Federal House and they have one senator about to come to the Senate. This is why internal democracy must be respected, let the will of the people prevail rather than this imposition.

“It is unfortunate what has happened in Imo State. At least, I have been vindicated for the fact that I said the APC candidate they are imposing on Imo people is not popular, he came from the opposition. When I was the leader of that party, when I was running the affairs of that party, we won 24 seats in the House of Assembly, we have governor, federal house members but today APC does not have because of imposition,” he said

“I have not contravened any section of the constitution and I have not done anything wrong not to be given my certificate. I pray and hope INEC would do what is just and what is right.”

Asked if he discussed the issue with the President, Okorocha said “I don’t think that would have been necessary to do because, it’s a straight forward matter. INEC conducted election, results were declared – the returning officer declared the results and I won. Only, one week later to hear that somebody wrote a petition that he issued that declaration under duress. I say where? Was it in his private house or was it in the collation Centre?

“If it is the collation, SSS were there, police were there, international observers, INEC officials and many others. So who actually put him under duress?” he queried

“The man has not been able to say that. Nobody has ever sent a statement about that. But I think INEC would want to do the right thing very soon.

“Now in the same way, the governorship candidate of PDP never won that election because the election flouted section 179 of the constitution of the Federal Republic of Nigeria which says that you must have the highest votes and you must have 25 percent in two third of the local governments.

“Now, this gentleman who was declared the winner by the same INEC, had 135,000 votes from 24 local government but had over 130,000 votes from his three local governments. Of course you know, he didn’t win that election. But even at that, we had the highest mark, the Returning Officer of INEC was never patient to even calculate to know that it was 200,000 votes cancelled and there is supposed to be a rerun.

“Also flouting that basic constitution of the federal republic of Nigeria which says you must have 25 percent in two-third, he doesn’t have it.