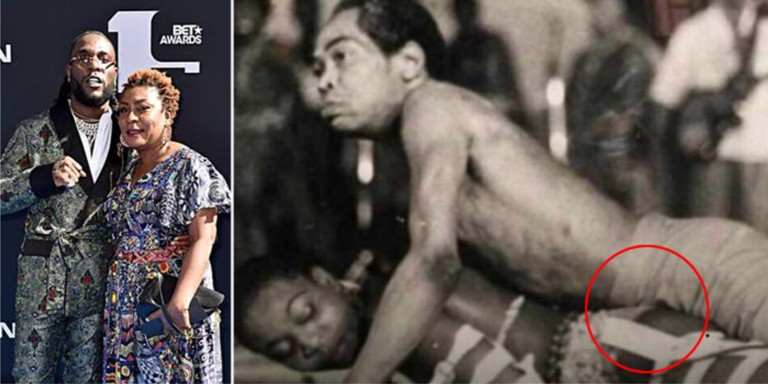 Many people are fueling suspicion that the current international Afrobeat sensation, Burna Boy might an offspring of legendary Afrobeat singer, Fela Kuti.

A photo of the legendary Nigerian Afrobeat singer, Fela Kuti with one of his dancer rocking on stage during a performance has recently surfaced online. The photo caught our attention not because of the compromising position Baba Fela was caught in with his stage dancer but because of the identity of the dancer.

Apparently Bose Ogulu has been in the entertainment scene longer than we anticipated. As a photo of her has surfaced with Nigerian own King of Afro pop, Fela Kuti.  In the photo, Bose Ogulu, could be seen lying stomach flat on stage while king of afro pop, Fela Kuti was on her, rocking her backside with his joystick.

Fela is known to have had sexual escapades back in his days. Fela Kuti, the creator of Afrobeat, is know by many as “the man who married 27 wives”. On 18 February 1978 he married the entire female entourage of his band in a ceremony conducted by a Yoruba priest.

Many may be wondering who Bose Ogulu is, why did she catch our fancy? For those of us that don’t know who Bose Ogulu is, Bose is the mother and manager of our very own Afro pop star, Burna Boy – the real rave of the moment, internationally recognized best African artiste 2019.

Not many people know this, but Burna Boy could have been Fela’s son if nature had permitted a turn of events. This is because Burna Boy’s mother, Bose Ogulu was one of Fela’s dancers in the 80s and everyone knows what Fela does to his dancers! Yes, he gets them pregnant and sometimes marries them.

However, we can not lay claim to the possibility of that happening as Bose reacting to the rumour that has been circulated about her; been a dancer for Fela Kuti, said, “”How could I have danced for him? Chronologically, it doesn’t add up…when did I dance for Fela?”

Bose Ogulu, one time dancer of the creator of Afrobeat Fela Kuti is now the mother of king of Afrobeat (arguably).

A photo of Bose Ogulu and Fela in a very serious position has emerged which suggests that Burna Boy’s mother was more than just a dancer for Fela. Checkout the photo again.

Here are a few facts you should know about the sensational Bose Ogulu:

1. Bose Ogulu is the daughter of Benson Idonije, a veteran broadcaster, and music critic. He is also famed for being the first band manager of the legendary Fela Anikulapo Kuti.

2. She managed Burna Boy’s career for a few years before he revealed, in 2014, that he had fired. Although, it is not clear if she is back to managing him or not.

3. She has a Bachelors of Arts in foreign languages; she is fluent in French, Italian, German, Yoruba, and English.

4. She also has a Master of Arts in translation and has worked as a translator for the Federation of West African Chambers of Commerce.

5. Bose Ogulu taught French for 10 years at the University of Education in Port Harcourt.