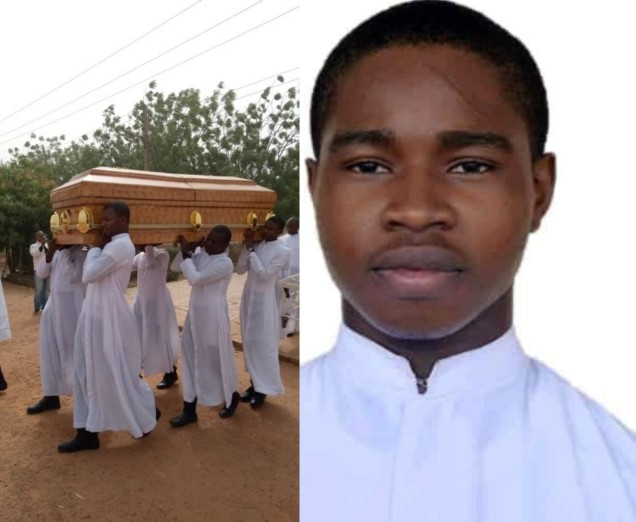 There were tears and anguish in Kaduna state as Seminarian Michael Nnadi, who was abducted and killed by Bandits was laid to rest at the premises of the seminary school on Tuesday along the Kaduna-Abuja Expressway.

The 18-year-old Nnadi was one of the four students of the Good Shepherds Major Seminary School, Kaukau, abducted by bandits at the school premises.

The four students were abducted when heavily armed men invaded the school at Kaukau in Chikun Local Government Area of the state along the Abuja – Kaduna Expressway on January 9, 2020.

Three weeks after the incident, the Registrar of the school, Rev. Father Joel Usman, announced the release of the three of the students on Friday, January 31, 2020.

Those set free are Kanwai Pius, Stephen Amos John Paul, Umeanuka Peter. They are students of philosophy at the Seminary.

However, in less than 24 hours of the announcement of the release of the students, the Registrar said the only missing student was later found dead.

While conducting the funeral service, the Bishop of Sokoto Catholic Diocese, Bishop Mathew Kukah, vented his anger on the President Muhammadu Buhari, saying that the President has displayed the greatest form of insensitivity in managing the affairs of the country.

He, however, urged Christians to imitate the sternly quality of the late Michael Nnadi and Leah Sharibu, the Dapchi schoolgirl who had been held hostage by the Boko Haram insurgents since 2018.

He said, “We know that Michael’s strength will inspire an army of young people to follow in his steps.

“We will march on with the cross of Christ entrusted to us, not in agony or pain because our salvation lies in your cross.

“We have no vengeance or bitterness in our hearts. We have no drop of sorrow inside us. We are honoured that our son has been summoned to receive the crown of martyrdom at the infancy of his journey to the priesthood. Leah Sharibu is a martyr for the faith and so is Michael.”

See more photos from the funeral below.