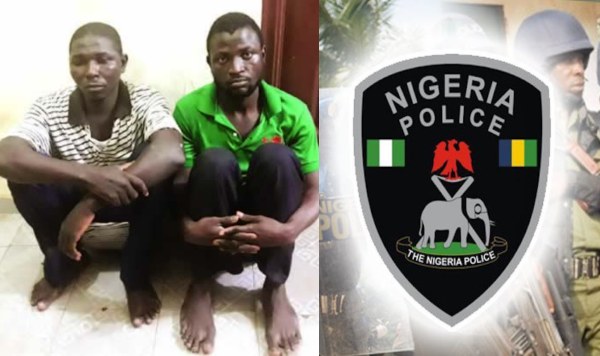 A native doctor who abandoned his trade has been arrested alongside his partner for using army uniforms to rob and high jack cars.

The native doctor was identified as Abdullahi Mudi and it was learnt that one of the strategies of the two man gang, was to dress in army uniform, pose as passengers by hailing a cab and strike with toy guns after they had entered the cab.

Punch reported that the suspects who recently stole three cars in the Federal Capital Territory and sold them in Kogi State, ran out of luck after Illia accosted a man along the road in the Garki area of Abuja and dispossessed him of N450,000 and two phones.

The victim of the last attack had reportedly parked by the roadside to urinate when Illia attacked him. Illia who was tracked down through one of the phones he allegedly collected from the man, could not drive and was said to have fled with the man’s car key and taken it to Mubi’s house, where it was later recovered by the police.

Mubi who was subsequently arrested, told newsmen that he was introduced to robbery in 2012 by a friend, who assured him that he would make more money in the act than working as a native doctor.

He said, “I am a native doctor and I treat people of stroke, broken bones and other illnesses. I was living in Lokoja, Kogi State until 2012 when one of my friends in Lagos State introduced me to carjacking. He said the ‘business’ would fetch me more money than treating people.

“He taught me how to drive and we started removing people’s cars at parks.  My friend had a master key which we used to steal cars at nightclubs. I was arrested during one of our operations and charged to court. I spent four years in prison before I was released on bail. I relocated to Abuja in 2016 and started treating people again.”

He further disclosed that he met Ilia after he came to him for treatment of gonorrhoea early this year. According to him, it was during this time they came up with the idea of carjacking.

“Illia then suggested that we should get military uniform. We wore the uniform to bus stops at night. We flagged down any neat cab and after we entered, we would point toy guns at the driver and force him to stop the vehicle. We would collect his money and drive off. We normally received between N120,000 and N150,000 for each vehicle we sold,” he added.

Ilia who on the other hand confessed to have stolen several phones, told newsmen that it was Mudi who introduced him to carjacking.

He said, “I was a security guard. I became desperate after I lost my job and I started robbing people of their phones. I usually went out very early in the morning. I attacked people whose vehicles broke down or who were working alone. I dispossessed them of their valuables including phones and money. I later met Mudi, who introduced me to carjacking. We carjacked three vehicles together and Mudi got a buyer for the cars.”

“Sometime in November, I sighted a man urinating along the road in the Garki area around 5am while his car was parcked by the roadside. I approached him and pointed a toy gun at him. I found N450,000 and two phones in his vehicle and took them away.”

The suspect who disclosed that he fled with the man’s car key for fear that he might chase him, disclosed that he sold the two phones for N10,000 and also gave Mudi N5,000 to help him prepare a charm that would discourage the man from going after him.

He added, “I then went on a spending spree. I bought clothes for my girlfriend and furnished my house with part of the money.  It was somebody I sold one of the phones to who led the police to arrest me and I took the police to Mudi’s house.”