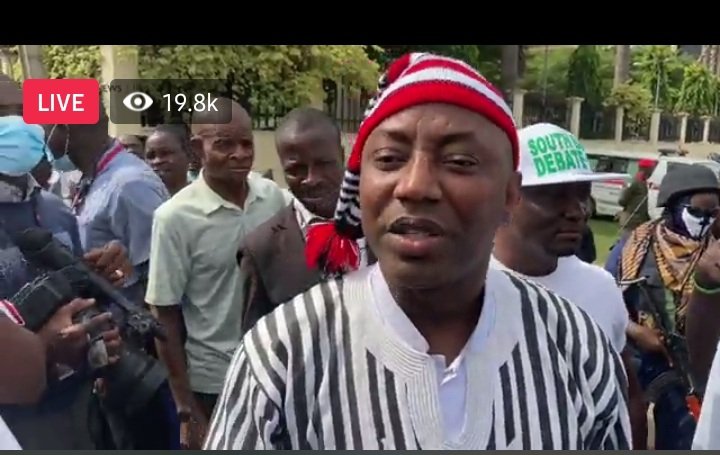 Publisher of Sahara Reporters and convener of EvolutionNow moment, Omoyele Sowore, was attacked by alleged sponsored hoodlums at the Federal High Court in Abuja on Thursday morning.

Sowore was denied access into the court by the security operatives. But as he was still talking to the security men, some boys numbering about 20, it was observed arrived.

Their presence was noticeable in the confusion because they looked unkempt.

It seemed clear that the people were there for trouble. But to the surprise of everyone, the security agents kept quiet.

Immediately the suspected hoodlums descended on Sowore, slapping and punching him. To the surprise of everyone, the security agents just looked on but intervened after shouting from those present by holding Sowore back.

However the hoodlums after attacking Sowore left without being apprehended by the security agents.

This led to another outrage as people around demanded they must be arrested. The members of the public then chased the hoodlums to apprehend them as the security operatives looked on.

When the situation got rowdy, the security operatives intervened and held a couple of them. The response of the security agents caused speculation that the hoodlums were backed by the government.

Before the incident, Sowore said: “A court room is not complete except people are there to witness proceedings. I want to sit right in front of the judge and witness it all.

“They have assured us that Kanu will get justice. He is my friend and I should be here. But the security agencies are still not allowing me in.”

After the situation with the hoodlums, the security operatives got hostile and attacked everyone including journalists. They hit some reporters with sticks and pushed some.

The security agents threatened to break the cameras of some journalists and other people recording the situation. They even forced some people to delete their videos and photos. They chased everyone away from the vicinity of the courts expect a few journalists who refused to leave. Even after identifying themselves as journalists, they remained hostile and continued to threaten.

Watch video from the scene below.