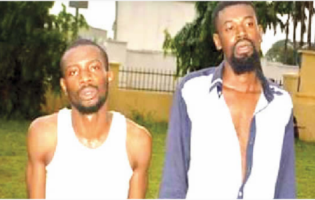 Two suspects have been arrested for allegedly killing a 26-year-old student of Federal University of Technology, Owerri, Kingsley Okwudiri.

Imo State Police Command paraded Damian Ugonna, 26, and Ikechukwu Chukwuemeka, 27, in Owerri for the gruesome murder of the undergraduate.

The State Commissioner of Police, Rabiu Ladodo said that the killing took place on April 17, added that the operatives of the Special Anti-Cultism Unit of the command responded to the situation.

According to him, the suspects had made useful statements to the command, even as he pledged that they would be prosecuted.

He said, “Following the murder of Kingsley Okwudiri, 26, a student of the Federal University of Technology, Owerri, on April 17, near Villa Castle hostel, Umuerim Okwu extension, Nekede, operatives of the Anti-Cultism Squad arrested two suspects, Damian Ugonna, 26, and Ikechukwu Chukwuemeka, 27, in connection with the gruesome murder of the victim.

“The suspects have made useful statements to the police and are cooperating in the investigation. Under my reign in this state, no criminal will be allowed to walk the streets as a free man. We will pursue the matter to its logical conclusion.”

Meanwhile, the Special Anti-Robbery Squad of the Imo State Police Command has apprehended two armed robbery suspects in the state.

Parading the suspects, Ladodo, said that the breakthrough was part of the command’s commitment towards ensuring that the state was crime-free.

He said the suspects are Chukwu Chukwuemeka, 31, and Osinachi Ebogu, 25.

Ladodo said that the suspects had robbed one Chibuike Osuji of his motorcycle and phones at Ehime Mbano Local Government Area of the state.

The CP said, “On April 12, 2019, the suspects were arrested at Umuagba Umuezeala Ama in the Ehime Mbano Local Government Area of Imo State.

“The suspects are members of an armed robbery syndicate that engage in snatching motorcycles in the area.

“They have made useful confessional statements to us and will soon be arraigned in court. Crimes do not pay and I want to tell parents and guardians alike to begin to imbibe morals and discipline in their children and wards.”