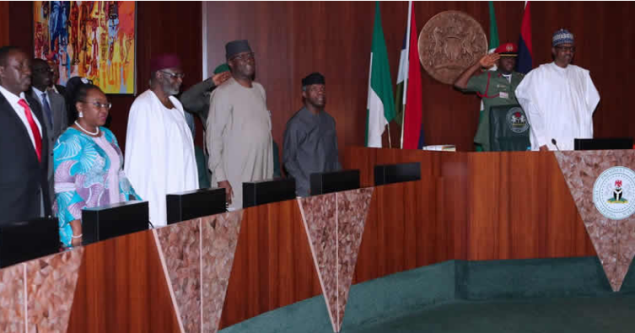 During the Federal Executive Council meeting on Wednesday, President Buhari encouraged cabinet ministers to take advantage of technology to reach out to voters on the need to return the All Progressives Congress-led administration in next month’s general elections.

President Muhammadu Buhari pledged that he would not authorise the use of any money from the government treasury for his re-election campaign.

He reiterated his commitment to eliminating corruption in campaign financing in the country.

The President made the declaration in a statement by Malam Garba Shehu, the Senior Special Assistant on Media and Publicity at the close of the meeting of the Federal Executive Council in Abuja.

“As political parties spread their ideologies and views to every nook and corner of the country, the issue of cash payment to voters and its corrupting influence in electioneering has once again become a topical issue.

“Try and use text and multi-media messages to seek votes for the party and government.

“There is no money from the treasury for use in the campaigns. I will not authorise that.”

According to him, the APC-led administration has a clear development agenda best suited to take Nigeria forward and sustain economic development.

‘‘This message needs to be taken to all Nigerians that we cannot use money from the treasury to share out to prospective voters.

‘‘Nigerians want change and we alone can deliver that change. Our people can no longer be swayed by money politics,’’ he added.

The President also used the occasion, which was a valedictory session for the Minister of State, Foreign Affairs, Hajiya Khadija Bukar Abba Ibrahim, to wish the minister success in her electoral contest.

The minister had signified her desire to leave the cabinet, in line with existing regulations, to run for a legislative seat in her native Yobe State.