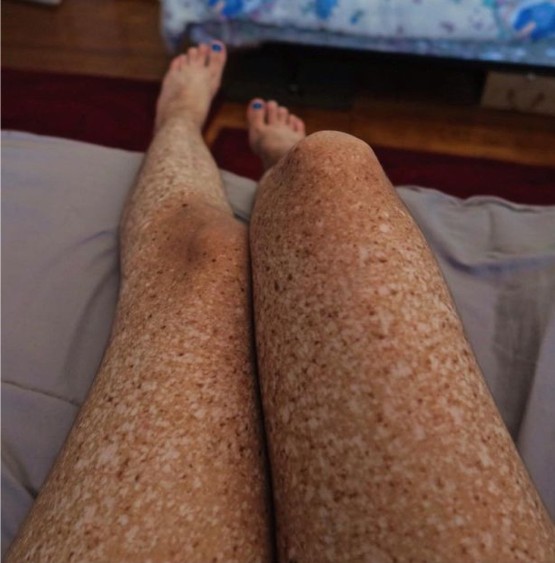 A rare medical condition has forced this 26-year-old blogger to stay away from sunlight and live indoors or walk only in the dark like a vampire.

Andrea Ivonne Monroy suffers from xeroderma pigmentosum (XP), which means her skin can’t repair DNA damage caused by sunlight. The sun’s rays could cost her her life so she stays away from it.

On the rare occasions when she has to go out in the day time for a medical checkup, she is forced to cover up completely, including wearing a protective hat and mask, to protect herself from the sun or risk skin cancer.

Her one-in-a-million genetic condition has also forced her into an early menopause.

People with the condition have an average life expectancy of just 37. Andrea Ivonne lives with her parents – Maria and Martin – in San Diego, California, and the house must always be kept dark during the day with curtains that block out UV light. The family can only use LED lightbulbs inside and Andrea Ivonne has to carry a light meter with her.

Due to her condition, Andrea was home-schooled by her mum and she works from home. She has never been able to go out to work. Her body’s severe reaction to all light, especially sunlight, means daylight actually hurts her eyes.

Andrea refuses to see XP as a handicap.
She said:

I just love being this human that I am.
I’m complete with the human I am. I’m complete with everything I am and what I have.
I am in the menopause, as women who have what I have go through the menopause faster than women without it, but I don’t want to have children. I wasn’t born to be a mother.
You don’t need a significant other to be complete. You don’t need a child to be complete or to be a woman. I’m fulfilled because of who I am, the person I’ve become and I just love what my life is.

In 2014, when she attended the XP Family Support group conference, she learned that female XP sufferers need to have children before their late twenties because the condition also means they will go through an early menopause, Mirror reports.

Single Andrea Ivonne said: “From the age of 11 or 12, I knew I never wanted kids. I just never saw myself in the future with children.”

She has, however, admitted in her blog, Nightlens, that going through the menopause is tough.

Andrea Ivonne said: “My body is so tired. I get exhausted a lot, my moods have been on a roll, my migraines are back and so many other things have been going on with me. But I am getting better and I am slowly getting back to my old self and that feels wonderful.”