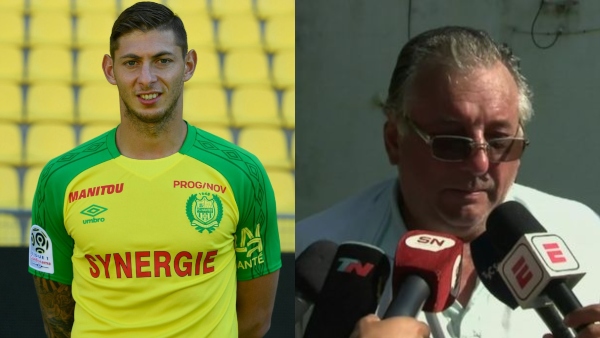 Three months after the tragic death of then newly signed Cardiff striker, Emiliano Sala, his father, Horacio has succumbed to the cold hands of death following a heart attack.

Sala was killed on board a private jet while  flying from Nantes to Cardiff shortly after completing his £15m move to the Premier League side.

58-year-old Horacio who was confirmed dead by a local politician, died in Argentina after a heart attack as he could not be saved by local paramedics.

Horacio, a former truck driver, had made emotional pleas during the search for Sala and was pictured with Cardiff manager Neil Warnock at his funeral.

“2019 doesn’t let up in shocking us with news in this town,” mayor of Progreso, Julio Muller said.  At 5 o’clock in the morning, the lady, his wife, rang me and she was very upset.The doctors were there but when I arrived at their home, he had already died.

“He could never overcome what happened to Emiliano. When the body was found he thought the case would be closed – but all the news that came to light about the pilot was very difficult.”

Speaking days after the crash, Horacio described his son as a ‘small town humble boy’ to Argentine TV.

“I cannot believe it. This is a dream. A bad dream. I am desperate,” he said. He was a lad who always fought for what he had.”