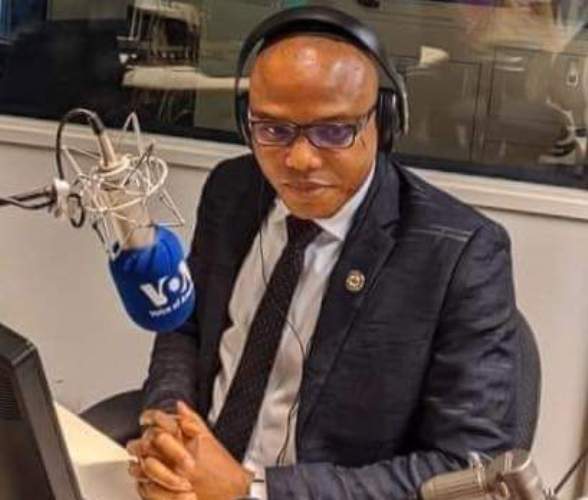 The leader of the Indigenous People of Biafra (IPOB) Nnamdi Kanu has defended the actions of the yet to be identified gunmen who attacked a correctional centre in Imo State.

The gunmen had stormed the correctional centre on Monday morning, after attacking the state police police command freeing suspects and inmates, setting the facilities on fire.

However, with many reports linking IPOB to the attack, Nnamdi Kanu came out to defend the attack with the claim that no one deserves to be in prison in Nigeria.

According to Kanu, if the killer herdsmen and the Boko Haram insurgents could be arrested, freed, and rehabilitated, the same gesture should be extended to other prisoners in the country.

“If Miyetti Allah terror herdsmen and other murderous #Fulani groups, including Boko Haram insurgents can be arrested, freed and rehabilitated by this neo-colonial Fulanised @NGRPresident, then no single soul deserves to be in any prison in Nigeria”, Nnamdi Kano wrote on Twitter.

Meanwhile the Media and Publicity Secretary Emma Powerful of IPOB has said the attacks were not carried out by operatives of Eastern Security Network (ESN) set up by the secessionist group.

Mr Powerful in a statement released on behalf of IPOB said: “The attention of IPOB has been drawn again to the fallacious and fabricated news that IPOB and ESN are involved in the attack of prison and police headquarters in Owerri Imo State.

“IPOB and ESN are known groups not unknown gunmen. ESN is in the bush chasing Fulani terrorists, why linking IPOB and ESN to this attack. IPOB and ESN were not involved in the attack in Owerri Imo State. and the recent attack on Onitsha Owerri road at Ukwuorji junction. It is not our mandate to attack security personnel or prison facilities.

“The Nigeria Government and her compromised media outfits should stop linking IPOB and ESN to the multiple attacks going on in Nigeria now. IPOB was formed on principle of peace and we are still in it. Unknown gunmen is a different people which we don’t know them and they not IPOB or ESN security outfit.”