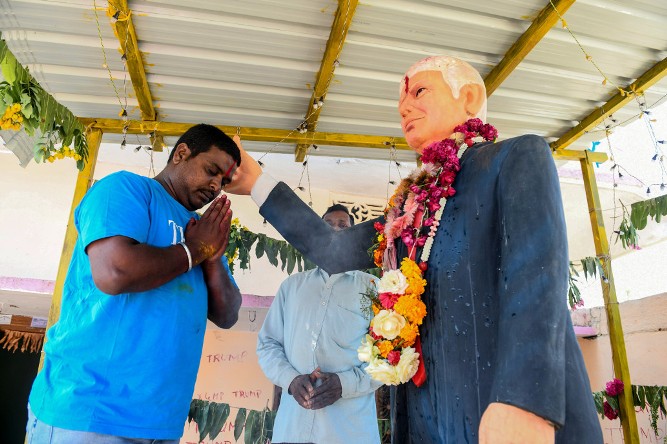 The president of the United States of America, Donald Trump has become a ‘god’ as there is a life-size statue of him in India which someone worships and refers to as ‘god’.

Ahead of Trump’s state visit to India, the Indian man begged authorities to let his dream come true by giving him the opportunity to meet Trump.

He informed the authorities that he has a life-size statue of Trump as a shrine in his garden which he offers daily prayers to.

Bussa Krishna, 37, who says President Trump is his “god,” whom he started worshiping four years ago, claiming that Trump ‘came to him in a dream’

After the dream, Krishna says he employed 15 laborers to work with him for a month to make the 6-foot statue of Trump in his village in the southern state of Telangana, India.

“Instead of praying to other gods, I started praying to him,” Bussa Krishna told New Delhi TV (NDTV),  showing the statue of Trump in a red tie and blue suit , and calling him ‘my god, Donald Trump.’

“My love for him has transformed into reverence that has given me immense happiness. Hence instead of praying to other gods, I started praying to him,”

“I am facing difficulties because of my relatives,” Krishna said. “They tell me that I am disgracing them in society. I told them that just like you believe and worship Shiva, I believe and worship Trump. Neither of us can stop the other from doing so.

“He is like a god to me, that is the reason I had his statue built,”
“Every Friday I fast for Trump’s long life. I also carry his picture and pray to him before commencing any work,”

Krishna, who lives alone, is now known locally as Trump Krishna, and his house has been dubbed Trump House.

See more photos and video below.