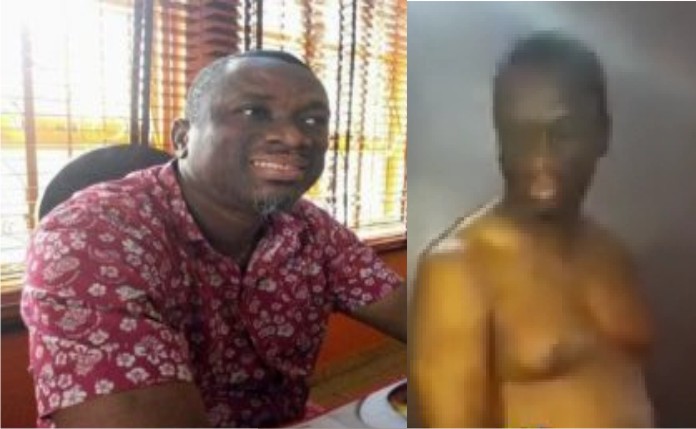 The Imo State University, Owerri, has set up a committee to investigate the authenticity of the footage circulating on the Internet in which the Head of Department of Biochemistry of the institution, Prof. Emmanuel Agumuo, was caught pants down, having sex with ones of his students.

The HoD, who was naked when he was handcuffed in the footage, was arrested by plain-clothed security men.

Sources said the don, apart from allegedly collecting N150,000 as bribe from the female student, also demanded sex from her in order to pass her.

The source, who spoke on condition of anonymity said, “The female student, who is about getting married, had issues with her result after her mates had graduated. She approached her Head of the Department, but he demanded N150,000 bribe, which she paid. The professor also demanded sex from her.

“The professor rejected the girl’s plea that she was getting married soon. The girl then played along with the aid of security men. The don was arrested naked in a room with the girl. Of course, the nude video is all over the Internet.”

Responding to the brewing scandal, the university said that it had set up a committee to investigate the authenticity or otherwise of the video allegedly involving one of its lecturers.

The Public Relations Officer, IMSU, Ralph Obinjoku, who spoke to our correspondent on Wednesday, said the management was not taking the development with kid gloves.

He said anybody found culpable would not be spared by the management.

Obinjoku stated, “We just rose from an expanded management meeting and I want to tell you that a committee has been set up to investigate the authenticity or otherwise of the nude video, which had one of our lecturers.

“The university is not taking the development for granted and the vice-chancellor has asked the committee to do a thorough job. Our university does not tolerate sex-for-mark or any act that lowers the excellent academic standard of our citadel of learning.”