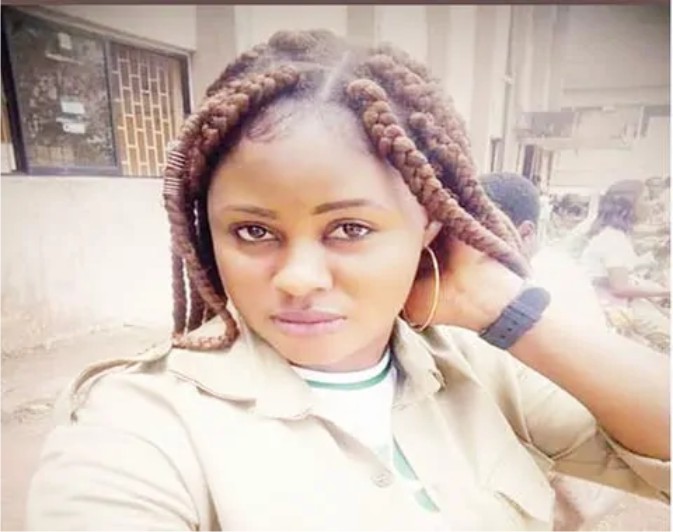 Operatives of Special Anti-Robbery Squad, Federal Capital Territory Command, Abuja have been accused of sexually assaulting and killing a 28-year-old graduate of the Institute of Management and Technology, Enugu, Ifeoma Abugu.

Ifeoma Abugu’s family told The Punch that she was attacked when three policemen stormed the residence of her fiancé, Afam Ugwunwa, at Wumba village in the Lokogoma area of Abuja, around 5pm on September 10, 2020, to arrest him.

Unfortunately, on getting there, the policemen reportedly did not find  Ugwunwa and decided to arrest Ifeoma and took her away.

The family said that all efforts to know the police station she was being taken to proved abortive, adding that she was not found until Ugwunwa got a call the next day that Ifeoma had died and her corpse had been deposited in the morgue.

Her brother, Alex said the deceased had just finished her National Youth Service Corps and was arrested and killed four days after she had her introduction with Ugwunwa in Enugu State.

He said, “I was in Lagos when one of my junior brothers called me that he learnt that SARS arrested our sister and she died in detention. I just came to Abuja today (Sunday) and I have asked some of my uncles, who have been to the police station, and they said that the policemen alleged that they met my sister unconscious on the bed and they carried her to hospital, where she died.

“When I asked my sister’s fiancé what happened, he said he went out and someone called him on the telephone that SARS had arrested my sister and when he came back, he called someone he knew at the SARS office to help in facilitating her release, but the person was unable to do it that night.

He said her fiance even tried to give the woman money to secure her release, but the woman called him back to inform him that she had died.

Alex said when his uncles saw the picture of her corpse, they could see signs that she was sexually assaulted.

He added that the family Is still awaiting  the result of an autopsy to come out to ascertain what happened to her.

“My sister was arrested four days after her introduction in the village and her wedding was slated for December. We want the killers to be brought to justice.”

The family’s lawyer, Ifeanyi Mamah, urged the Inspector-General of Police, Mohammed Adamu, to order a proper investigation into the matter.

He said, “She (Ifeoma) had just finished cooking that day, while her fiancé and her friend had finished eating and the friend left, while the fiancé went to see a friend in one of the neighbouring estates, when he received a call from a neighbour that the police had come to arrest his fiancée and she had been taken away and he received another call from Ifeoma that she was been taken away by SARS, but she didn’t know where they were taking her to.

“Ifeoma’s fiancé called a friend of his to help in looking for her and secure her release, but she was not found, only for the fiancé to receive a call the next day that she was dead and her corpse had been deposited in the morgue.”