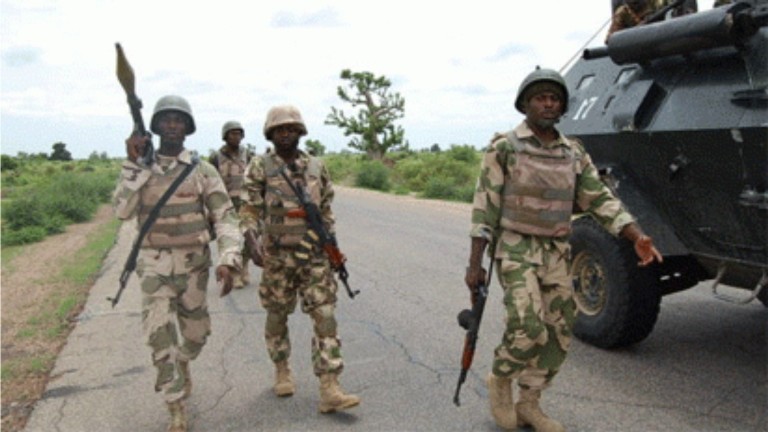 Soldiers have purportedly barricaded the entrance of the family house of Mazi Nnamdi Kanu, leader of the proscribed Indigenous People of Biafra, IPOB.

Amnesty International, AI, quoted residents as saying the soldiers are also harassing residents in the area ahead of Kanu’s parents’ burial scheduled for Friday.

It has been confirmed that Afara Ukwu, Kanu’s community is currently greased with heavy security personnel.

Disclosing this in a statement obtained by TheCable, AI said it gathered from some persons that “they saw soldiers harassing people at Bank road while another man said he was prevented from going to his house by soldiers who blocked the road entrance to Eze Kanu’s palace.”

Osai Ojigho, Amnesty director in Nigeria, called for caution, and asked the security agencies to “deescalate the rising tension” in the Abia community.

“The Nigerian security forces must exercise restraint and prevent a repetition of the September 2017 events that left at least 20 people killed and some still missing, when the military attempted to arrest Nnamdi Kanu in his home in Afara Ukwu”, Ojigho said.

“While law enforcement officers are within their rights to carry out their lawful duties, the use of force should be proportional and strictly limited to those situations where it is absolutely necessary. Both IPOB supporters and security forces must at all times respect and protect human rights of all.

“Concerns about possible violence during the funeral must be addressed within the framework of human rights and rule of law.”

Since the burial was announced, there has been a hot exchange between the police and IPOB, which was proscribed last year.

While the group has insisted on attending the event, Ene Okon, Abia commissioner of police, has vowed that the funeral would not take place if IPOB members attempt to attend it.

Kanu, who has been on the run since 2017 has vowed to hunt down children of CP Okon if a shot is fired at the funeral which he said will be broadcast live.