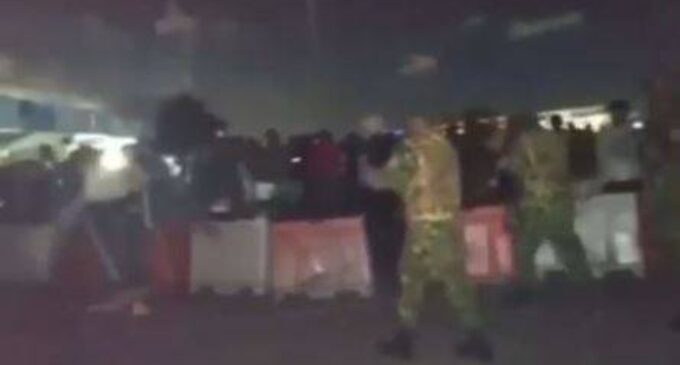 Salisu Bello, commanding officer of 65 Battalion of the Nigerian Army has alleged that contrary to widespread reports, soldiers did not shoot #EndSARS protesters at the Lekki Toll Plaza on October 20, 2020, instead, it was his men that were attacked.

Bello made this assertion in his statement on oath filed before the Lagos State judicial panel probing the Lekki shooting and cases of police brutality.

Security operatives believed to be soldiers had on the 20th of October 2020, brutally opened fire on peaceful #EndSARS protesters at the Lekki toll gate, this led to the death of some of the protesters with several others injured.

The Nigerian Army had initially denied reports of being at the scene of the incident but later admitted that the Lagos State Government invited them to ensure peace and calm on the streets amid the protests.

The Army also vehemently denied using live ammunition on the #EndSARS protesters who gathered at the tollgate, adding that soldiers did not take any dead bodies away, contrary to reports by eyewitnesses.

Bello while giving a statement at the panel on Saturday, denied the report that soldiers killed some protesters at the tollgate, but said that the protesters were all happy to see the officers.

In a report by The Punch, the commander said that he personally offered protesters water and drinks, while persuading them to go home.

According to Bello, while he was moving towards the Lekki-Ajah Expressway around 6.45 pm, he heard gunshots before the tollgate and later realised that the crowd had turned from peaceful protesters to a mob.

He said: “On getting to the tollgate, I persuaded the crowd to go home and observe the 24-hour curfew declared by the state government.

“But surprisingly, the hoodlums continued throwing stones, bottles and other dangerous objects at us and were burning tyre. I again fired some blank ammunition upward to scare the hoodlums away.

“But some protesters who were still at the tollgate sitting down quietly were given water and drinks by me while pleading with them to go home.

“We did not fire at the protesters.

“Blank ammunition were fired upward to scare the hoodlums from the crowd. Nobody was shot dead at the Lekki tollgate, there was no massacre as claimed.

“The claim that the military took away dead bodies was not true. The protesters were happy to see us as indicated in some of the video clips of 20th October 2020.”

Brig-Gen Francis Omata, Commander, 81 Division Garrison, VI, while telling his side of the event said: “On arrival at the tollgate at about 7.30 pm, I met a rowdy situation.

“I also met the Commanding Officer, 65 Battalion (Bello), who briefed me on the situation.

“He briefed me that he met a hostile crowd, hoodlums mixed with the protesters, who were chanting and throwing stones at them. I was able to disperse the crowd by firing blank ammunition into the air.

“At this point, stones and sticks were being thrown at us. Then I moved to a safe area and briefed General Officer Commanding 81 Division, Maj Gen Godwin Ahamefuna Umelo by phone.

“The General Officer Commanding directed me to pacify the hostile crowd and move the troops back to base. However, the crowd still continued chanting #EndSARS. I then instructed the troops to withdraw to base.”

However, the absence of the two youth representatives serving on the panel stalled Saturday, November 7, proceedings and the Army officers could not testify.

PM News reported that the duo, Temitope Majekodunmi and Olorunrinu Oduala, on Saturday, November 7, 2020, shunned the sitting of the judicial panel in protest against the freezing of the bank account of those who were linked to the #EndSARS protests.

Chairperson of the Lagos State judicial panel of inquiry, retired Justice Doris Okuwobi, said due to the absence of the youth reps, proceedings will not hold because the panel could form a quorum.

“We are confronted with a situation which prevented her from coming. We do not know if the two youth representatives will eventually pull out. We do not want a situation where proceedings will go on and it is impugned that with controversy due to a lack of quorum. In all matters, we have to wait for them to join us, without them we are handicapped,” she said.