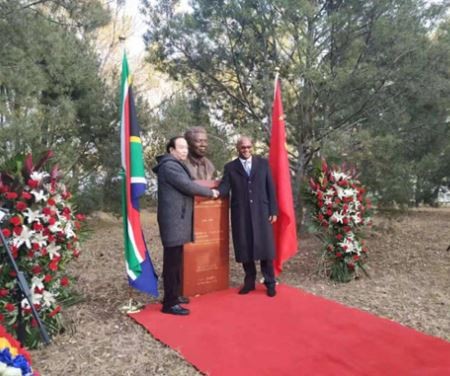 In a bid to commemorate 100 years since the birth of Mandela a bust sculpture of Nelson Mandela, known as Madiba in South Africa has been unveiled at the Beijing Jintai Arts Museum. It was also used to mark 20 years of diplomatic relations between South Africa and China.

The bust and inscription were contributed to by the SA Embassy in Beijing and Consulates General in Shanghai and Hong Kong. SA Minister of Arts and Culture Mr. Nathi Mthethwa was present as a guest of honor alongside other senior government officials.

During the unveiling, the national anthems of the Republic of South Africa and the People’s Republic of China were played, and a number of guests placed flowers under the statue.

2018 marks 100 years since the birth of Nelson Mandela. The former South African President is globally renowned for his selfless contribution to the global struggle against oppression and the fight against apartheid in South Africa.

“Globally, Madiba is renowned for his role as a great negotiator and a living symbol of reconciliation. He is a symbol of unity in a country, South Africa, which is courageously grappling with the legacy of a vicious past,” Mthethwa said during his speech.

He explained that when Mandela and his compatriots were jailed for life in 1964, China was among the countries that sent protest notes and called for their release. Subsequently, China was one of the countries that Mandela visited after his release from prison. Given the historical ties between South Africa and China, said Mthethwa, it was Mandela who embraced and ultimately promoted the one-China diplomatic policy, which saw South Africa and China establish diplomatic relations on Jan. 1, 1998.

During her speech before the unveiling, Ambassador Dolana Msimang said, “It is most fitting that we celebrate our 20 year anniversary together with Madiba’s centenary, as he was the main architect who built, shaped and nurtured our relations with China.”