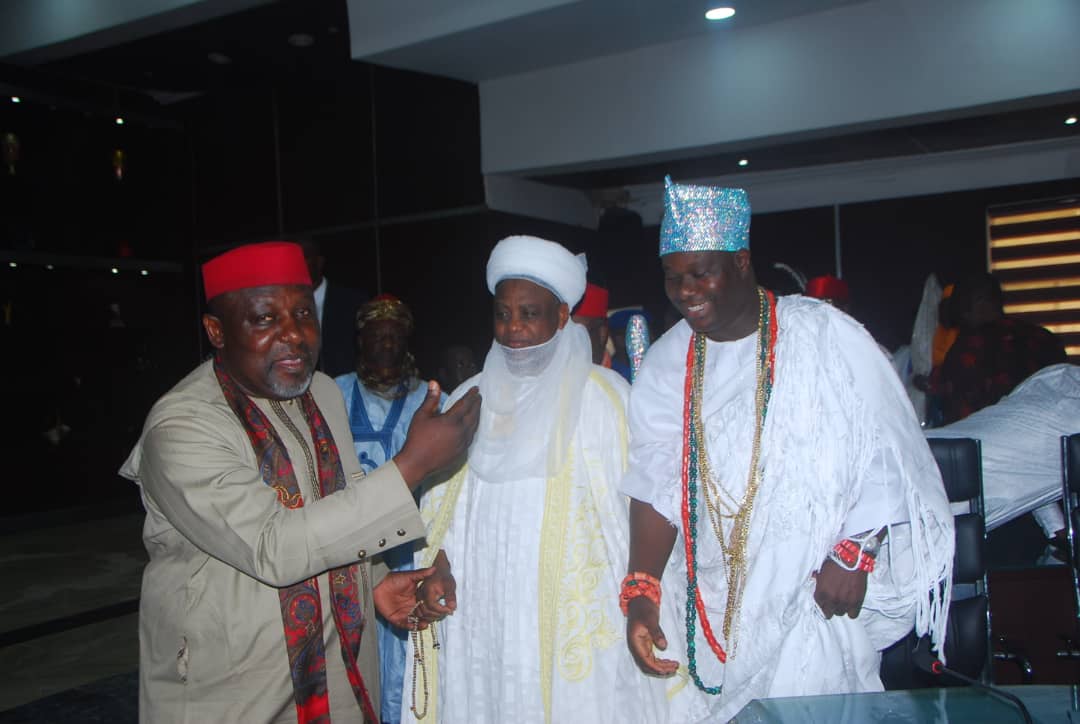 The traditional rulers who arrived Owerri for the august Summit fixed for Thursday, May 2, 2019 at the Palatial Eze Imo’s Palace Owerri had paid Courtesy Call on Governor Rochas Okorocha at the Government House Owerri, with the governor explaining why his opponents always misinterpret his firm belief in the Unity of the Country and call him “OkoroAwusa”.

The governor explained that he has always believed in the unity and indivisibility of this great nation especially when he recalls that he was born Igbo, brought up by the North and empowered by the West, adding that he has every reason to believe in the Country and her Unity.

The Ooni of Ife who spoke on behalf of the eminent traditional rulers said “We are here as traditional rulers under the umbrella of National Council of Traditional Rulers of Nigeria. What we are known for is to foster unity and peaceful co-existence across the entire country, Nigeria. We have decided to bring our meeting here, to further foster unity and peaceful co-existence in our dear Country and now to the South-East part of this Country, but in particular no other place than Imo State.

“We are happy over the good things the governor of Imo State has done over the last 8 years. We understand how you revived the traditional institution and particularly what you have actually contributed, a beautiful edifice for us to be having various meetings across the entire country. You have built a very great legacy for yourself”.

The Oni continued “We want to let you know and continue to assure you, particularly the entire South-Eastern Zone of this Country that there would be all inclusive initiatives to carry everybody along across all the various geo-political Zones in Nigeria and we know that Nigeria belongs to all of us and we don’t have any other place to go other than our dear Country Nigeria. Also, we want to associate with all the good things that we know that the South-Easterners are actually made of; and that is why you have seen a very rich and quality representation across the entire Six geo-political zones. We only know unity in the traditional institution in Nigeria and that is what we want to foster in the nation”.

He remarked “We will continue to move across the length and breath of this nation to foster peace across the States of the federation irrespective of political or religious differences inherent in those states. We all belong to Nigeria and Nigeria is greater than all of us. We want to associate with the government of Imo State, particularly with governor Okorocha who has done very well for the State over the last eight years. We shall continue to pray for you and wish you well as you are moving to another level. You have done your bit, and your legacies can never be erased. God bless you”.

They all commended their host, the Chairman of Imo State Council of Traditional Rulers, HRM Eze Samuel Ohiri for showing leadership.