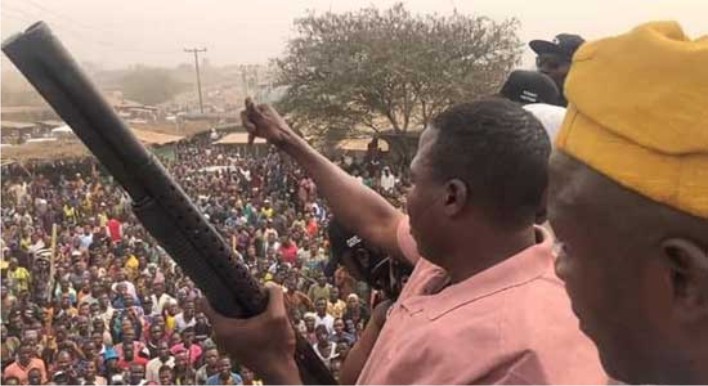 Popular Yoruba activist, Sunday Adeyemo a.k.a Sunday Igboho has declared the Indepence of the ‘Yoruba Nation’, claiming that South-Western states are no longer a part of Nigeria.

He made the declaration on Wednesday evening during a conference in Ibadan, Oyo state. According to him, it was high time for Yoruba to declare the race a sovereign nation.

Igboho urged all Yoruba indigenes who are resident in Hausa/Fulani or Igbo states, to return home before war breaks out.

He added that any Yoruba king that denied backing the movement to liberate the South-west will not ‘see the light of the next day.’

Although he spoke in Yoruba, the translation of his words goes thus:

“The people that call themselves Senators and leaders will be going in traffic and see 4 and 5-year-olds selling popcorn and puff-puff and they will buy and eat. Have you seen that they are not worthy to be called leaders, therefore we reject them as leaders,”.

“The Yorubas that are everywhere are larger than most countries, therefore we call on the global community and United Nations to come and separate us. We are no longer interested in being part of Nigeria before this becomes war,. They need to intervene because we want to go.

“We are not safe anywhere, we can’t sleep in peace, we can’t travel in peace, what have we done? Are we slaves? We don’t do wrong by existing, we only chose the wrong leaders and we are saying enough is enough!

“Tincan in Lagos, Apapa, the directors are Fulani men. The two ports we have, the controllers are Fulanis. We don’t want them anymore!

“Seme border, we don’t want Fulani there anymore! When Baba finish talking now, we the Yorubas here will have a crucial meeting, we are going to open the borders, let’s start allowing goods to enter!

“The borders that NIGERIAN Government closed, we are opening it all, we are no longer interested in being part of Nigeria! Whatever you want to do to us, we are ready! I’m talking to Yoruba indigenes! you can stand aside and say there is no unity among us, but touch a single Yoruba man, you will see that we are united.

“All our Kings are solidly behind us, any of them that want to deny it should make a press conference, let’s see. He won’t see the light of the next day! My advice to the Yorubas in the North is to find your way back home.

“Start coming home, it is time! We have suffered enough, let’s not fight among each other, let’s unite for a common cause, it is time to come home. That’s all I have to say”