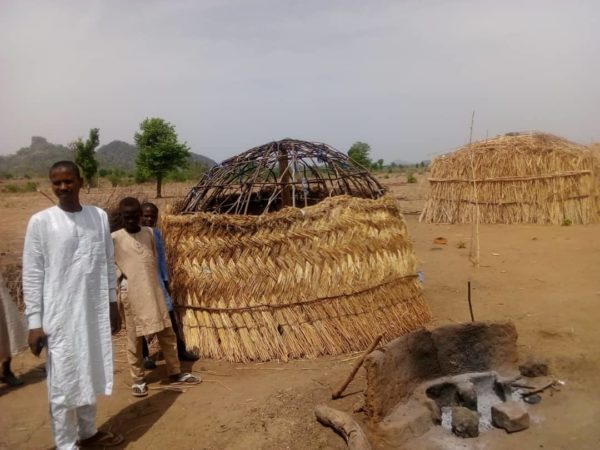 This is an important fact-finding mission embarked upon by Vanguard on the true state of IDP camp in Bauchi State where it was reported that children was seen eating onion leaves. Expressiveinfo will capture it here as it was published in Vanguard.

Since the emergence of a report indicating the poor living conditions of Internally Displaced Persons (IDPs) who, last year, came to settle in Bauchi, after being dislodged by Boko Haram from their home state of Borno, several claims and counterclaims have been made regarding the welfare of IDPs in the State.

Vanguard embarked on a fact-finding mission to ascertain the true story of the onion leaves-eating IDPs who are now squatting on a hectare of semi arid land, 2km from Rindebin community, north of Bauchi local government area of Bauchi State.

Locating the IDP camp was difficult as it was exhausting. Very few people along its axis (about 2 in 10 locals) knew about the IDP camp. Our one hour journey to the camp was accompanied by dust and fear as we rode along the uneven topography and lonely path to the camp.

We arrived at the camp at exactly 10:42am on Friday, to the waiting arms of IDPs who were very eager to tell their story – everyone of them, even the women and children. We were then ushered into a hut made from dry stalk of maize and dry grasses, a room Vanguard later learned, was their visitor’s room.

Their leader, Usman Bulama Guja narrated how they have severally tried to get help from the State government and other relevant agencies but got empty promises or were outrightly turned down.

He decried the deteriorating health conditions, especially in women and children, which he attributed to lack of proper feeding and unavailable sanitary facilities in the camp.

“We have tried several times to bring the government to look into our situation, but they are either making empty promises or looking the other way. Sometimes, they say it is because we are not registered. But what confuses me is why they won’t register us, if that’s what it takes to assist us. Are we not Nigerians,” he queried rhetorically, adding, “Sometimes, all they do is to come here and take records and that’s all.”

While he was still speaking, a stench of dry faeces blew across the room where we were sitting, “Toh, this is what I am talking about; everywhere smells of shit, we can’t breathe good air! We defecate in the open air around our huts because we don’t have toilets. And, our women are most affected,” he lamented.

When asked if they actually ate onion leaves, Guja nodded in confirmation and said, “The reporter who first visited us, saw our children eating onion leaves for lunch. We didn’t have to tell him anything because anyone with eyes can see that. We only eat breakfast and that’s all. But you know, the children cannot bear hunger, so they eat onion leaves to assuage the hunger.

“After the State government heard the story that children ate onion leaves, they sent people from SEMA to tell us that we must tell journalists and visitors that it is our culture to eat onion leaves. But we won’t be intimidated, our culture has nothing like that. The children were hungry that’s why they were seen eating onion leaves. If they won’t help us, they should allow others to come to our rescue.”

A middle-aged man, Dahiru Ibrahim was appointed to guide us around the vicinity. The first place we were taken to was where they sourced their water; a dry riverbed with 2 shallow hand-dug pits, popping out brownish-yellow water.

A closer look at the pits, showed footprints of cows and other animals around the perimeter of the shallow pits from where they source their drinking water.

Ibrahim told Vanguard that they usually wait for cows to finish drinking from the pits before fetching water they use for drinking, cooking, washing and other household chores.

“This our fate, we have no choice than to accept what we have,” Ibrahim said, pointing down to their source of water in disappointment. “My wife is presently lying ill in our apartment but I can’t do anything to help. I have tried all I could but the sickness just won’t go away. Only God knows what is causing it.”

One of the women who spoke with Vanguard, Hauwa Yusuf said her biggest challenges are lack of food and finding a proper place to ease herself when she is pressed.

“My major problem is hunger. I don’t know when I start crying; I don’t want to see my children hungry. I just want them to be fed. The other challenge we face here is where to ease ourselves, especially as women. We find it difficult during the day time, as you can see, there are no grasses or trees to cover us,” Mrs Yusuf said.

Another woman, Aisha Musa Kanfu told our reporter that she wants her children to attend school and be educated so that they will not turn out disadvantaged like her.

“My children were attending school in our community before it was burnt by Boko Haram. I wish the government would provide a school where our children can learn so that they can be better than us. Things are bad now but I have faith that help will come,” Mrs Kanfu said.

A pale-looking 10 years old Zainab Abba, who was leaning on her mother told our reporter that she wants to be a politician when she grows up so she that she can help people in bad conditions.

“When I grow up I want to be a rich politician so that I can help many people who are suffering in my community. I will give them free education, free medical services and free food,” she said, letting out a little smile.

Vanguard reports that, as at the time of filing this report, no assistance has been received by the over 2,000 IDPs who look to their government for support in their time of need.