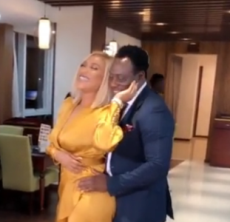 Nollywood actress, Tonto Dikeh aka King Tonto has put to rest the confusion and misinterpretations surrounding her viral photos and videos where she was in a romantic dinner date with Ex-footballer, Daniel Amokachi.

In an interview with Elsie Godwin of PLUS TV Africa, Tonto Dikeh revealed that they are just friends and the two of them were just signed as Ambassadors of a Chinese Restaurant in Nigeria and the photos and videos that appeared on social media were just promotional footage for the brand.

(He is) married and has children, We are ambassadors for a new restaurant, the biggest Chinese restaurant in Africa, which is opening in Nigeria. So we were filming, hence the photos and dance.” she said.

Watch the video of the interview where she also spoke about how she initially wanted to be an engineer but ended up being an actress after a Reality TV audition she attended. She also talked about her spiritual life, saying she’s a born again and speaks and writes in tongues.