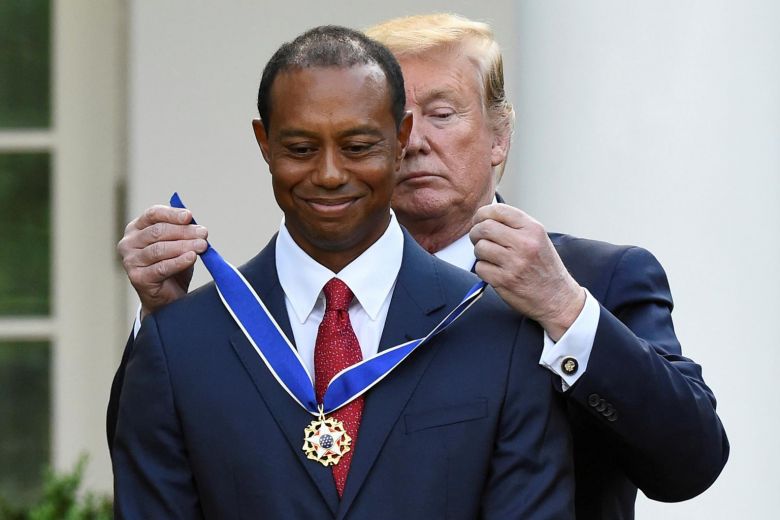 Tiger Woods was awarded the Presidential Medal of Freedom by President Donald Trump at the White House on Monday for his relentless will to win.

The honour came weeks after the legendary golfer staged an epic comeback victory in the Masters.

Presenting the golfing great with the nation’s highest honour, Trump praised Woods winning mentality, saying he is a ‘true legend’.

“These qualities embody the American spirit of pushing boundaries, defying limits and always striving for greatness,” the president said.

Trump congratulated Woods on “your amazing comeback and your amazing life and for giving sports fans a lifetime of memories.

“We can’t wait to see what’s next, Tiger,” said Trump, an avid golfer and owner of several golf courses around the world.

Woods, 43, choked up as he thanked his mother, his two children, his girlfriend and his caddy during the ceremony in the White House Rose Garden.

“You have seen the good and the bad, the highs and the lows,” said Woods, who battled back from injury to win the Masters last month, his first major title since the 2008 US Open.

“I have tried to hang in there and I have tried to come back and play the great game of golf again,” Woods said. “I have been lucky enough to have had the opportunity to do it again.”

He said his Masters victory was “probably the highlight of what I have accomplished so far in my life on the golf course.

“To have had that type of experience and to be able to come out on top and win,” he said.

Established by John F. Kennedy in 1963, the Presidential Medal of Freedom is bestowed upon those who have made an “especially meritorious” contribution to US security or national interests, world peace, cultural pursuits or other non-specified endeavours.

President Barack Obama gave the medal in 2014 to Charlie Sifford, the first African American golfer to play on the PGA Tour.

During his speech, Woods praised Sifford who he said was “like the grandpa I never had.”

“I ended up becoming so close with him that I ended up naming my son Charlie after him,” he said. “So to have been chosen as the next golfer after Charlie is truly remarkable.”

Woods’ Masters was his 15th major title, leaving him just three short of the record held by Nicklaus.

Woods, a black superstar in a white-dominated sport, has steered clear of commenting on politics during his career.

He has golfed with Democratic presidents Bill Clinton and Barack Obama and with Republican presidents George H.W. Bush and Trump.

He has hit the links with Trump on several occasions, most recently in February at the president’s course in Jupiter, Florida.

Woods was asked last year about his relationship with Trump, who has been engaged in an ongoing feud with a number of African-American basketball and football stars.

“Well, I’ve known Donald for a number of years,” Woods said. “We’ve played golf together. We’ve had dinner together.

Woods said the important thing was to respect the office of the presidency, regardless of who happened to be occupying the White House.

“No matter who is in the office, you may like, dislike personality or the politics, but we all must respect the office,” Woods said.