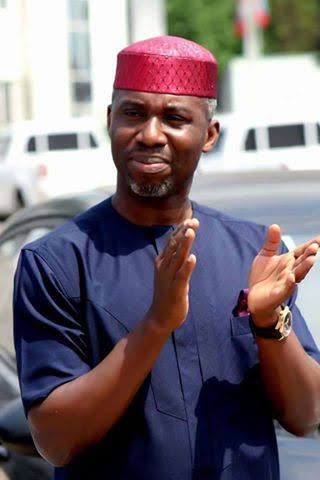 In the run-up to the governorship election in the State, Ugwumba Uche Nwosu would always instruct his campaign directors, coordinators and staff, never to indulge in anything that would tarnish the integrity of the electoral process. I remember on a day one of the old politicians in our team brought a suggestion on how we could win with ease, no matter what the real voters did, His Excellency Ugwumba Uche Nwosu dismissed the suggestion and emphasized on the need for everyone to build good relationship with the people, in order to secure their confidence and have them vote for us. He spoke from his heart that day;

“I am not interested in stealing the people’s mandate, but in earning it. If I invest in rigging this election, it means that I do not have any respect for the people and will not care about them when I become governor. I know that Imo people know what they want and I believe that if we do our work well, we can convince a majority of them to vote for us, because I am the best of all the candidates in terms of integrity, preparedness and competence. I will not rig this election, even if I have what it takes to do so. I will rely entirely on the support and votes of our people.”

This did not shock a number of us who have known him for sometime now. Uche Nwosu is not a desperate man. He believes in the people and would not condone any idea that tends to alienate the people from the process of getting power. Some people had tried to convince him that our electoral process in Nigeria is tainted with fraud, and that anyone who wants to win must somehow invest in fraud. But, he waved that off, arguing that if it will take just one person to change that in Nigeria, he will want to be that person.

Nwosu built his campaign around the people and invested all his resources in the people. He depended on the people for his victory and the people did not disappoint him. It is the cabal who decided otherwise and robbed him of his well-earned victory. His campaign rallies were always packed with enthusiastic crowd of passionate youths, women, men and even children. Review all the pictures and videos of campaigns in this State and you will find out that he pulled the highest crowd among all the other candidates. This crowd translated into real votes on election day.

Ugwumba Uche Nwosu would have been the first person to call whoever emerged as the winner of that election to congratulate him and concede defeat, if the results reflected the real voting that took place on election day. He respects the power of the people, and if he had been convinced that Ihedioha’s purported victory was what the majority of Imolites wanted and that his declaration was in line with the letters and spirit of our Constitution, he would have since given him every support he needed to move Imo State forward.

Ugwumba Uche Nwosu is not in court in desperation to become governor of Imo State. He has never been a desperate man, but a man who believes in God’s grace and mercy upon his life and who would always make himself available for service for the benefit of mankind. He is in court as a patriot who believes in the sanctity of our Constitution and the sacrosanctity of the people’s power to choose whom they want as their leader according to democratic norms. It would have been counted as a betrayal upon him, if after seeing the mindless rape of our sacred Constitution and the reckless robbery of the people’s votes, he decided to keep quiet.

For him, a just society is not a mere wish but a possible dream, which will require the tenacious sacrifices of committed patriots to attain. The danger with allowing illegalities is that it soon become traditional. If one illegal declaration is allowed to stand today, it bolsters criminals to go on to perpetrate more illegalities believing that it will be ignored. Uche Nwosu can afford to go home and have a long deserved rest, but the sanctity of our Constitution would have been eroded and the freedom of our people to free choices would have been deprived from them, maybe forever.

While forensic analysis of all the results from the election shows that Ugwumba Uche Nwosu recorded a clear victory, meeting all the Constitutional requirements, the forged results with which INEC declared Rt. Hon. Emeka Ihedioha winner also failed to meet clear Constitutional provisions for someone to be declared returned in a governorship election. It would only take a traitor to ignore such glaring unconstitutionality and repression of people’s will. Ugwumba Uche Nwosu is fighting not really for himself, but for all men and women of goodwill who appreciate freedom, constitutionality and democracy. He is fighting to ensure that transgression does not become so tolerable that it is taken as righteousness.