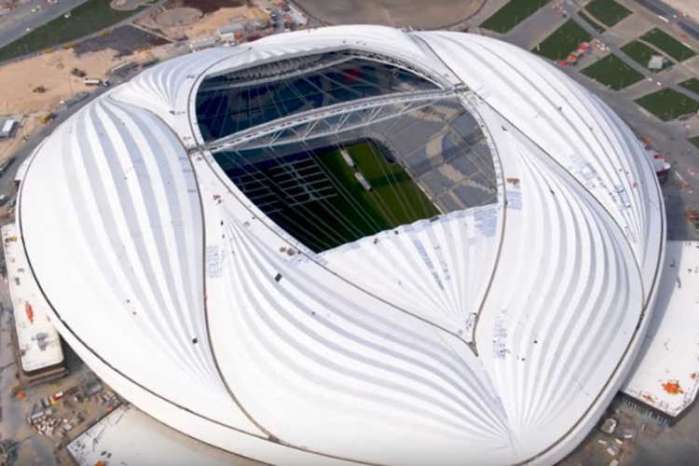 Ahead of the FIFA World cup 2022, a ‘vagina-shaped’ football stadium has been unveiled in Qatar.

The Al Wakrah stadium which happens to be the first to be completed from scratch ahead of the tournament and boasts of innovative technology to bring temperature down for fans, was designed by the late British-Iraqi architect, Dame Zaha Hadid and will host matches up to the quarter-finals.

Dame Zaha, who died suddenly of a heart attack in 2016, was said to have been inspired by the flowing shape of the Arabian dhow boats which are widely used for fishing in the region and the arena was to have a roof to resemble the sails of the dhow.

Dame Zaha Hadid died before she could see her design constructed, However when the drawings were published in 2013, the shape quickly raised eyebrows with fans saying it resembles female genitalia.

At the time, Dame Zaha hit back saying, ‘It’s really embarrassing they come up with nonsense stuff like this. What are they saying? Everything with a hole in it is a vagina? That’s ridiculous.’

The architect was also behind great buildings such as the Aquatics Centre at the 2012 London Olympics, the MAXXI Museum in Italy and the Guangzhou Opera House in China.

She added: ‘If a guy had done this project there wouldn’t have been the same level of criticism.’

Some critics actually supported the design of the ‘vagina stadium’ saying it could actually prove to be a good thing for the sport.

‘After all why not have 45,000 people crammed inside a woman’s reproductive system? It’s not like they haven’t been there before.’

The World Cup will take place in Qatar in the winter to ensure that visitors are not overwhelmed by the heat.

Dame Zaha’s stadium is 12 miles south of the capital Doha and has been designed to be able to bring down the heat to around 22C for spectators and players.

Cold air will be piped in through vents while the retractable roof will provide shade to the pitch.

Qatar is producing eight stadiums for the World Cup, including the renovated Khalifa International Stadium.

After the games are over, the capacity of the Al Wakrah stadium will be halved and the excess seats donated to football projects in developing countries.