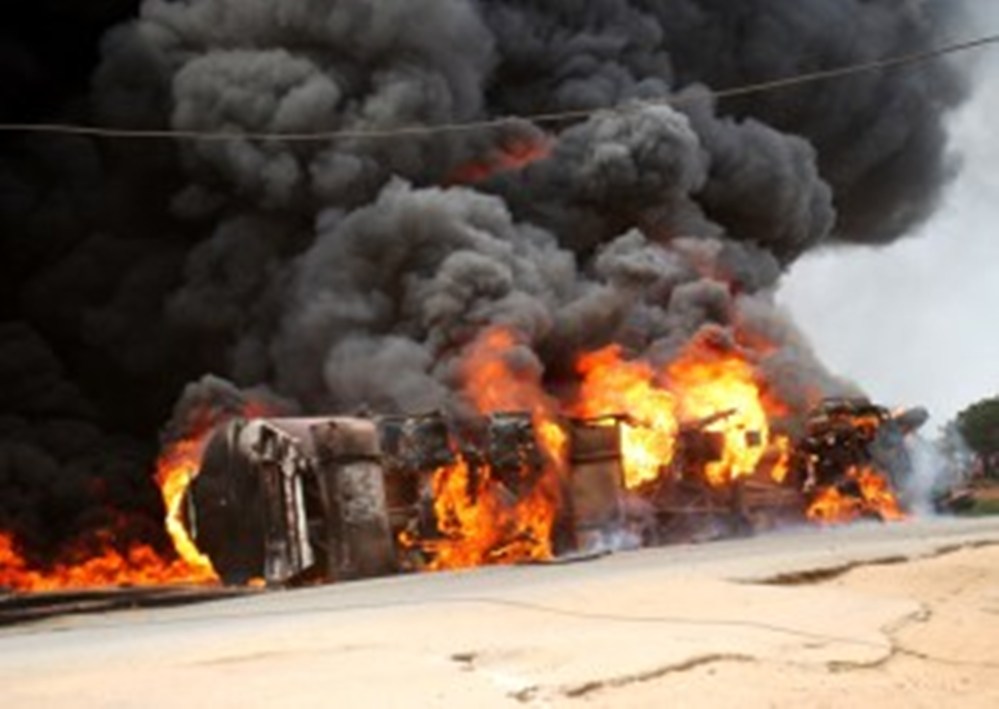 A woman and a man were burnt beyond recognition in a raging fire that erupted when a fuel-laden tanker exploded at Onipepeye area of Ibadan. Three vehicles and a motorcycle also caught fire in the incident.

According to an eyewitness, the truck with 33,000 litres of Premium Motor Spirit otherwise called petrol was going on very high speed and while trying to prevent running into a Micra car, lost control and the truck tilted backward, forcing the lids covering the tanks at the back to open thereby emptying its contents. The inflammable substance streamed down a link road to a woman using fire down the flyover. This resulted in a deafening sound followed by a huge ball of smoke and fire. Afterward, a loud explosion rent the air.

Three of the vehicles that were caught in the hold-up caught fire instantly. Some motorists who were stuck in the commotion that followed the loud boom struggled to run away. Some were lucky, while some were trapped in the inferno.

A woman whose shop was nearby said: “We suddenly heard a loud noise and before we came out, everyone was running helter-skelter to escape the fire. It was the tanker that exploded when it lost control. The fuel flowed down the flyover and connected fire from a woman who was selling edibles just at the foot of the link road. The fire trailed petrol from the tanker.”

“The impact of the fire would not have been this much if firefighters had come on time. They came about 40 minutes after. But, when they came, they were able to check the fire from spreading to other parts”, she said.

The security agencies were still trying to extinguish the fire while the naked bodies of the victims were yet to be attended to. The accident left many commuters stranded. Motorists who were yet to get to the spot of the fire were seen making u-turns to avoid being trapped.