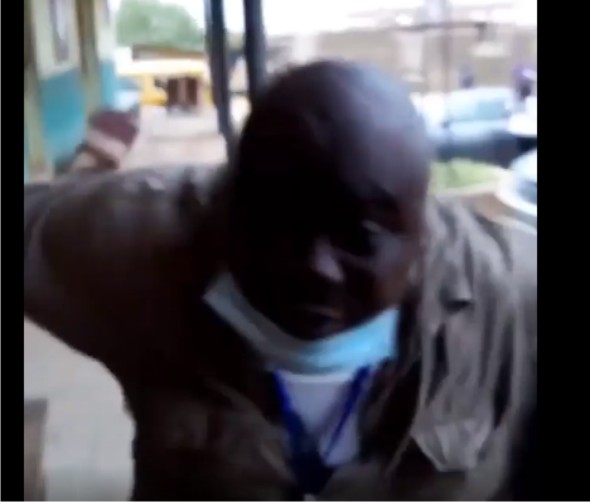 A video making rounds show moment a Covid-19 taskforce official in Ogun state was filmed battering a woman right before her husband.

According to the narration by the woman, she was traveling in the company of her husband to a supermarket in Ogun from Lagos, not aware of the total lockdown implemented in the neighbouring state.

They were then asked to pay N15,000 as fine and were made to follow the officials to their office in Sango-Otta, where the assault on the woman took place.

“This afternoon, on my way to #justritestores in Ojodu to buy a bicycle for my daughter whose 7th birthday is in 2 weeks, we were stopped at the intersection between Lagos and Ogun State (which isn’t properly marked) by #ogunstatetaskforce officials who informed us that there was total lockdown in #ogunstate during weekends and since we were in their territory, we had to get a pass from their local government office( Ifo Local Government office in Ojodu Abiodun) which is about 3 minutes away.

“They seized my husband’s ID card and requested that we drive them to the office. We refused to pick them in the car because of the #covid19 situation and they got really upset. I agreed to walk with the official while my husband drove behind us to their office.

“When we arrived, we were handed over to the man in the video who told us we would pay a fine of N15000.00 for disobeying the lockdown that was in place. We explained that we didn’t live in Ogun State and weren’t aware of the lockdown and asked to be pardoned so we could go home. I started recording because I saw that my pleas were falling on deaf ears while the officer called a guy to deflate our tyres. While recording, the man began to beat me.

“I am calling on #ogunstategovernor @dapoabiodunmfr and other government agencies to see what the officials they have put in the office are treating citizens.
The man beat me, kicked me, pushed me and punched me because of N15000.00.“