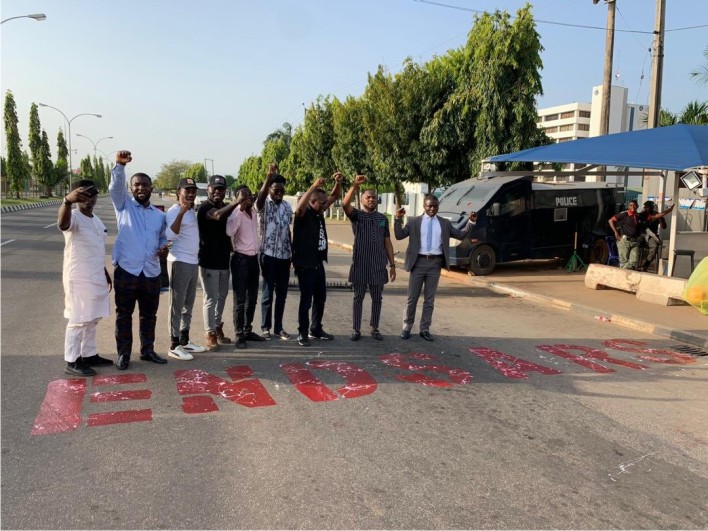 Some #EndSARS protesters regrouped and resumed demonstrations against police brutality in Abuja on Sunday.

The protesters numbering about 20 visited the Nnamdi Azikiwe International Airport and the Nigeria Police Force headquarters were they left #EndSARS inscriptions on the road for all to see.

Among them was #RevolutionNow converner, Omoyele Sowore.

They were seen chanting songs and calling on the relevant authorities to end police brutality and bad governance.

In a post on Twitter, one of the protesters named Adebayo Raphael said we “don’t want audio reforms,” referring to the promise by the government that the police will be reformed.

The demonstration continued as part of a nationwide protest against the now-dissolved special anti-robbery squad (SARS), but metamorphosed into calls for good governance.

“It was NEVER about #Endsars ALONE, Nigerians have been tired and frustrated about social inequality, oppression, corruption, unemployment, divisive and bigoted leadership led by the inhuman, incompetent and lifeless @mBuhari and #Endsars was the PERFECT storm! #RevolutionNow”