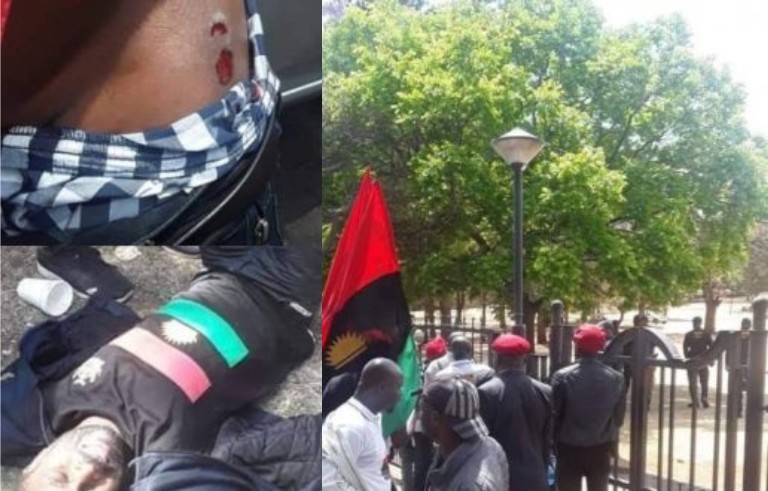 Members of the Indigenous People of Biafra (IPOB) in South Africa who came out on Thursday to protest against President Muhammadu Buhari’s visit were attacked by the South African Police in Pretoria. See video below.

Reacting to the incident, IPOB, in a statement signed by its spokesman, Comrade Emma Powerful described the incident as “barbaric and disgraceful”.

The group said that the attack against the peaceful protesters by South African police is proof that state sanctioned politics of savagery has taken firm hold in Cyril Ramaphosa’s South Africa.

“This is a thoroughly ugly and distasteful development that pales White aparthied regime into insignificance in terms of its brutality and incredulity,” the statement said.

Powerful revealed in the statement that the leader of the group, Nnamdi Kanu, would be holding an emergency live broadcast by 7 pm (Thursday) over the attack. He also said that Kanu would use the opportunity of the broadcast to expose the real reason behind the visit between the two African Presidents which was kept away from the public.

“The barbaric and disgraceful attack against peaceful IPOB protesters today by South African police is proof that state-sanctioned politics of savagery has taken firm hold in Cyril Ramaphosa’s South Africa.

“A thoroughly ugly and distasteful development that pales the White apartheid regime into insignificance in terms of its brutality and incredulity.

“We hereby place it on record that this Sudanese impostor Jubril Al-Sudani on whose account Cyril Ramaphosa ordered his police to open fire on peaceful Biafran protesters will never know peace, neither will Abba Kyari’s cabal in Aso Rock that have reduced Nigeria to an archetypal impoverished, backward 19th century Fulani emirate.

“Let them know that Jubril will be disgraced, hounded and exposed in every country he sets foot upon even if it happens to be in totalitarian glorified Banana Republics in Africa.

“The crass display of primitive police brutality and anti-democratic antecedents of the South African police is confirmation, if any is needed, that black Africa is hopeless and doomed.

“Join me live tonight on Radio Biafra at 7pm (Biafra Land Time) for an in-depth examination and analysis of these unfolding events in South Africa and the conspiracy of silence designed to protect the identity of Jubril Al-Sudani at all cost in return for subsidised crude oil from Biafra Land,” the release read.

See more photos of the injured IPOB members below.