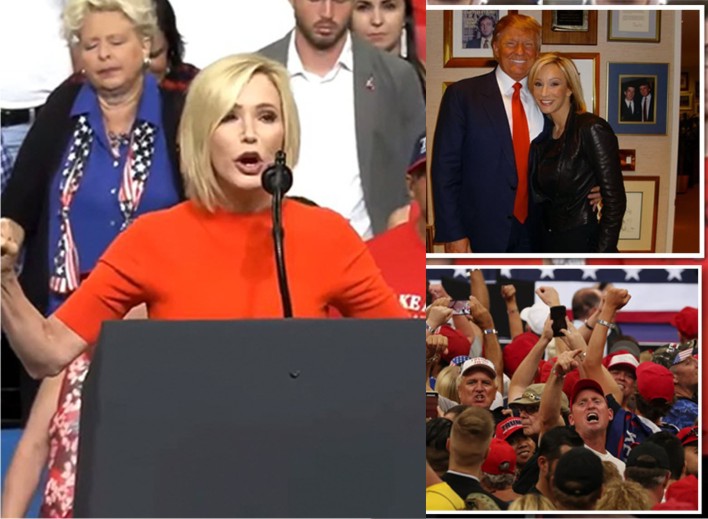 Trump’s spiritual advisor, Paula White has caused drama online after a video was shared online where she is calling on “angelic reinforcement” from Africa and South America to help Trump win re-election.

As the tension continue to rise over the ongoing US 2020 election, it is obvious that Donald Trump’s team is pulling out all the stops to ensure his reelection in the presidential race.

Apart from his close aides, even Trump’s spiritual advisor, Paula White is doing her part.

In a desperate move on Wednesday night, November 4, 2020, Paula White who is the White House spiritual adviser and head of the government’s Faith and Opportunity Initiative program hosted an impassioned prayer session.

Paula said, “The angels are coming here in the name of Jesus from Africa, from South America for angelic reinforcement.”

She prayed against the “demonic confederacies” that are attempting to steal the election from President Trump.

She continued, “Angels are being dispatched right now.” Then the prayer got even more bizarre as she uttered, “Angels have been dispatched from Africa right now. They’re coming here, in the name of Jesus.” She continued her chant in Latin, and repeated “I hear the sound of victory” many times in the video.

Reacting to White’s prayer, former CNN anchor Ishay Sesay wrote: “Hang on a minute… so she wants angels from AFRICA to help Donald Trump stay in the White House?? I thought he wanted us to stay in our ‘huts’ and ‘shit hole countries’. This my friends, is the definition of ‘trifling’…”