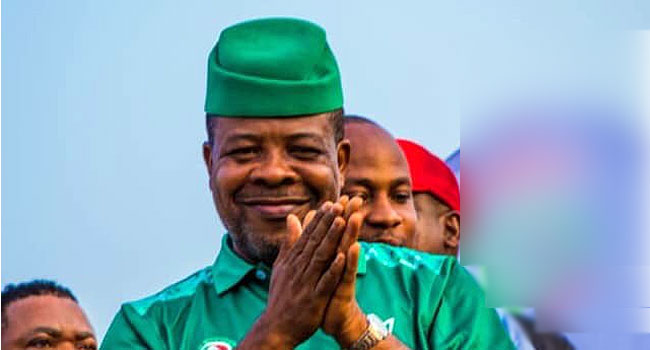 The Supreme court removed governor of Imo State, Emeka Ihedioha has said that those who do not vote the Peoples Democratic Party (PDP) and its presidential candidate, Atiku Abubakar, are saboteurs.

He also went on to say that only two political parties are in the coming election, and he mentioned that the parties are PDP and APC.

The ousted former governor also comforted Ndigbo saying, “Let me tell you, after Atiku Abubakar, the next president will come from the South East of Nigeria.” He added, “I have the key to the direction Ndigbo should go.”

In his speech, Ihedioha said, “Nigeria is in search of a leadership and we cannot make mistakes. I understand the power metrics in our country. It’s either we get involved or we are not involved.

“There are two parties at the end of the day in this election: The PDP and the APC! Anyone who doesn’t know it should know it. APC has failed. It is a name of thieves and rogues.

“We have only one party. If anyone votes elsewhere, is a saboteur to our aspiration.

“Let me tell you, after Atiku Abubakar, the next president will come from the South East of Nigeria (Claps and cheers from the audience). That is the gospel…

“It be clear to everyone in the next one month, where Nigeria is heading to. One month today you people will call me on phone. I want to tell you that I have the key to the direction Ndigbo should go.”