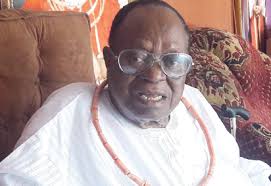 Esogban of Benin Kingdom, Chief David Edebiri, has said that confessed witches or wizards in the Kingdom are not killed or stigmatized but rehabilitated back into the society.

The Nation reports that he said this while addressing members of African Bar Association on certain aspects of Bénin culture, Chief Edebiri stated that witches are made ineffective and accepted back to the society after going through certain processes.

Chief Edebiri explained that he does not have the powers to cure ailments but the powers given to him by the Oba to deal with witches and wizards.

According to him, “Witches and wizards are my subjects. We deal with them in a decent way. There is no magical process in it.

“Once anybody confessed to be a witch, we send them to a home and a Chief is given the powers to disposes them. We take them through certain processes and they will become ineffective.

“They will go back to the society better persons.”

Chief Edebiri who urged members of ABA to help codify African Laws for future generation said it would be good if they lead the campaign to end despot rule in Africa.