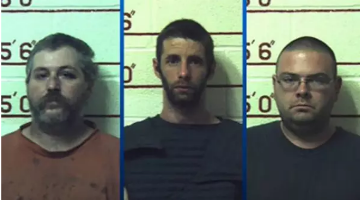 Three men are going to spend between 20 to 40 years in prison for defiling at least 12 farms animals.

The men from Pennsylvania were convicted for having sex with nine female horses, a cow, a goat, and dogs.

The men, Matthew Brubaker, 31, Terry Wallace, 41, and Marc Measnikoff, 34, were all sentenced to 20 to 41 years in prison on Monday after regularly abusing at least 12 animals for years.

According to Clearfield County District Attorney’s Office, the discovery was made after police were called to a remote “makeshift farm” where the men all lived in Munson, Pennsylvania, in August 2018.

They were arrested after a 16-year-old boy living at the property told police the men had been having sex with the animals, leading officers to the scene where they found a “large volume of homemade videos, recording equipment, and cameras”.

The men were charged with more than 1,400 counts relating to sexual intercourse with animals, cruelty to animals, endangering the welfare of children, and corruption of minors.

Clearfield County District Attorney William Shaw described the case as one of the most extreme cases of animal abuse he had handled.

He also added that the child living at the property had been taken into protective custody but that there were no allegations of him being sexually abused.