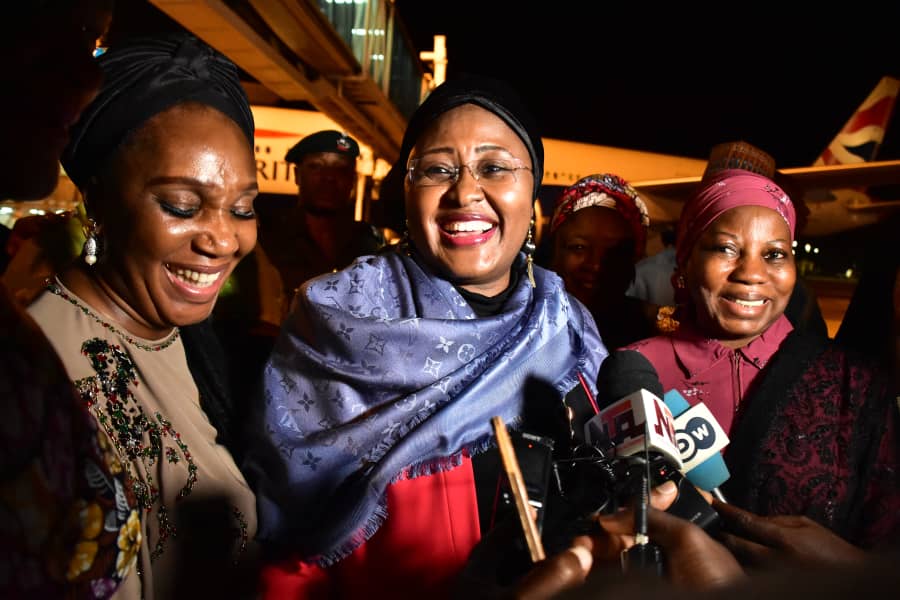 Wife of the President, Aisha Buhari arrived Nigeria on Sunday morning after staying over two months outside the country.

While the First Lady was away, it was widely reported that her absence is in protest of the recent happenings in the Presidency. Her absence became obvious after she became silent on important national issues and did not appear alongside the President at some important official functions.

It was also reported that Aisha Buhari had a face-off with her husband, President Muhammadu Buhari, which forced her to stay away from the country for an unusually extended period.

However, Mrs Buhari told newsmen that she was in the United Kingdom to be with her children as well as visit her doctor.

This was contained in a statement by the Director of Information to the First Lady, Suleiman Haruna.

Part of the statement said: “This morning, First Lady of Nigeria, Dr. Mrs. Aisha Muhammadu Buhari returned to the country after a long holiday in the UK.

“Wife of the President, Mrs. Aisha Buhari arrived Nigeria on Sunday morning after staying over two months outside the country.

“She confirmed that she was fully rejuvenated to continue the work of improving the health and well-being of women, children and other vulnerable Nigerians.

“She used the opportunity to thank her husband, family and well-wishers for their support and encouragement.

“On hand to receive her were wives of present and former and governors and many associates.”

There were  rumours last week that President Muhammadu Buhari was going to take a new wife.

According to the rumour, Buhari was scheduled to marry on Friday the Minister of Humanitarian Affairs, Disaster Management and Social Development, Hajiya Sadiya Umar Farouq.

But that didn’t happen at the Presidential Villa last Friday.