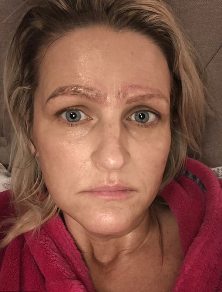 ‘I would never wish this on my worst enemy. What it’s done to my self-confidence, it’s been hard, I was devastated, I was even dating a guy and he stopped dating me at that point.’ She lamented.

A single mother-of-three has revealed she was dumped by the man she was dating and was embarrassed to leave her home after a botched microblading treatment left her with four eyebrows.

She was initially excited when her daughters bought her a $250 Groupon for the treatment last November because she was born without eyebrows.

Unfortunately, the discounted microblading session went horribly wrong, and she ended up with four brows instead of two. Not only did the end result shatter her self-confidence, but it also led to the demise of a romantic relationship.