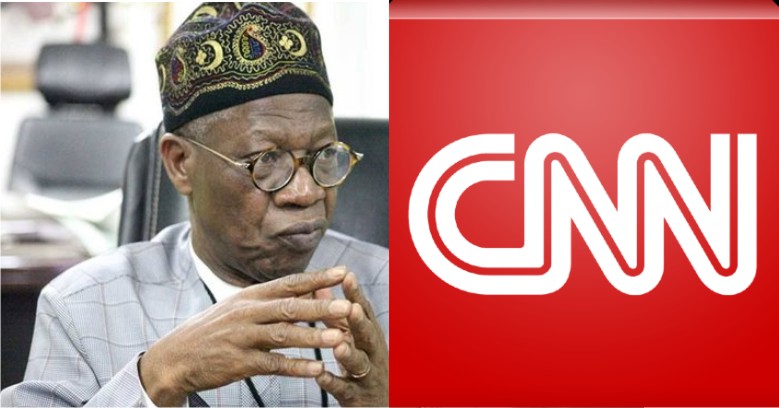 The Federal government has written a letter to Cable News Network (CNN), condemning its documentary on the October 20 shooting incident at the Lekki tollgate in Lagos, saying the report is capable of setting the nation on fire.

This comes as the role played by the soldiers who stormed the Lekki Toll Gate continue to generate controversy.

In a letter dated November 23 and addressed to Jonathan Hawkins, VP, communications, CNN, the Minister of Information, Lai Mohammed, said the report fell short of journalistic standards and also reinforced the disinformation that is going around on the issue.

The Minister also averred that the media house failed to show a balanced reportage.

The letter in part reads,

“Our attention has been drawn to an ‘investigation’ by CNN, entitled ‘How a Bloody Night of Bullets Quashed a Young Protest Movement’ and aired on 18 Nov. 2020, in which the international news organization said it had ”uncovered that Nigerian security forces opened fire on unarmed protesters” at the Lekki Toll Gate in Lagos, Nigeria, during the #EndSARS protest,” the letter read.

“In the first instance, the report did not live up to the most basic of the core principles of journalism – balance and fairness.

“Rushing to air such a momentous story without presenting the government’s side is inexcusable and indefensible. CNN said it contacted over 100 protesters and family members, but did not speak to one official of Nigeria’s federal government. While CNN said there was no response from the army and that officials of Lagos State would not speak in view of the Judicial Panel that is investigating the matter, it did not say what effort it made to speak with any official of the federal government.

“The truth is that CNN did not even attempt to reach the federal government. Nima Elbagir, who presented the report and most probably led the investigation, is conversant with the Minister of Information and Culture, yet did not say that she even tried to reach the Minister.

“Another serious breach by CNN, in its ‘investigation’, is that the network relied heavily on unverified footages it harvested from social media. CNN was not present at the Lekki Toll Gate on the night of the incident. Neither its reporter nor cameraman was there, but it relied on eyewitnesses.

“CNN has said it stands by its story, and that ‘our reporting was carefully and meticulously researched’, this is baffling, considering that the story lacks fairness and balance, as we have pointed out, and that the organization relied heavily on manipulated social media videos. This resort to an escapist cliche seems more like a face-saving measure by an otherwise respectable news network caught in the blinding glare of ‘fake news and disinformation’ headlamps.

“CNN, in its rush to nail soldiers and tell a ‘radically different story’, conveniently left out these parts of the Godson video, which could have shown that armed hoodlums invaded the Lekki Toll Gate that night, and could have hit any of the protesters as they shot sporadically. This is clearly a ploy by the CNN reporter/presenter to manipulate viewers of its ‘investigative’ report and force them to draw the reporter’s desired conclusion!

“As a form of remediation, Nigeria’s Federal Government demands an immediate and exhaustive investigation from CNN into its ‘investigative’ report on the Lekki Toll Gate incident to determine, among others, its authenticity, whether or not it met the basic standards of journalism and also the selective use of unverified social media videos to manipulate public opinion. While it is up to CNN to accede or not, please note that the Federal Government reserves the right to take any action within its laws to prevent CNN from aggravating the #EndSARS crisis with unprofessional, irresponsible, one-sided, inciting and sensational reporting that is capable of pitching Nigerians against themselves and setting the country on fire.”