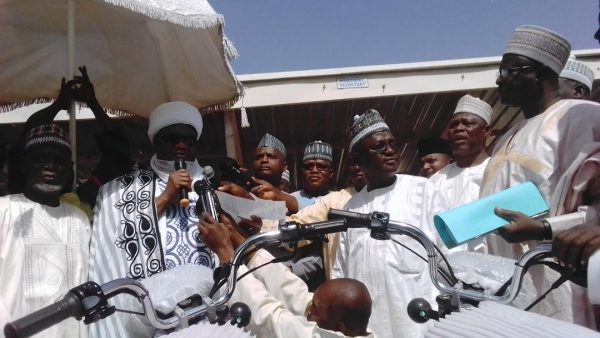 The Zamfara State Council of Chiefs, Last week, accused the operatives of the Nigeria Air Force of killing and injuring innocent residents during there onslaught against bandits in the state. In response, NAF denied the allegation, accused the chiefs of collaborating with the bandits to cause the killings in the state and challenge them to come forth with the names of innocent citizens killed by NAF operatives.

Yesterday, the State Council of Chiefs took up the challenge and released the names of eleven innocent civilians that they claimed were killed by a NAF fighter jet and a helicopter gunship which launched airstrikes on a rural community.

Another eleven people were said to be critically injured from shrapnel when a NAF fighter jet and helicopter gunship struck Dumburum community of Zurmi Local Government Area of the state. The attack took place on April 9, this year.

At a briefing in Gusau yesterday, the State Council of Chiefs, represented by the Sarkin Fulanin [Emir of] Bungudu Alhaji Hassan Attahiru reiterated its earlier stance that NAF attacks hit innocent civilians instead of bandit camps.

The emirs debunked allegations in some quarters that they were jittery due to the success being recorded by the military as a result of the ongoing onslaught against the bandits. They called for an independent investigation of their claims.

Their spokesman said, “We had a meeting with the Executive Governor and we provided secret information on the suspected armed bandits, kidnappers and their informants and even those doing business with them.

“We suggested that civilian joint task force members should be recruited. How comes that somebody would just come out and say we have not being helping matters?”

He added, “The crimes transformed from local to more organised ones. The police were earlier deployed and later the military too was deployed. Why is there no respite despite the presence of the military? The soldiers deployed sometimes pay us a visit in the course of their operations.

“It  is wrong for the military command to, for instance,  deploy only 30 soldiers and ask them to engage hundreds of armed criminals in a forest. That is why sometimes they get killed by these criminals. If NAF do their reconnaissance and dislodge the criminals from their camps, the ground troops should occupy the identified bases of the armed criminals.

“Even the attack on Tsanu village by the military, it was innocent civilians that were killed. We can provide documented evidence, but we don’t want to join issues with security operatives.”

The emirs said dozens of people were displaced by the attacks and they expressed readiness to cooperate with security operatives deployed to the state.

The emirs also raised the alarm over what they called unexploded bombs dropped on the Dumburum community by NAF. They called on the security operatives to go and defuse the bombs so that it would not detonate and kill innocent residents.

The emirs further charged the security operatives to reach out to armed bandits’ bases in the forest with a view to dismantling them. They said the operations are yet to get to the main camps of the armed criminals in the forested areas.

They also reiterated their demand that the names of prominent traditional rulers colluding with armed bandits should be exposed. “We want no stone to be left unturned in this matter,” they said.

A resident of Dumburum community where the airstrikes took place, but who craved for anonymity, corroborated the emirs’ story. He said he was inside the community when the jet came and fired rockets into the residential houses.

He said, “About 4pm on that day, shortly after Asr prayer, a fighter jet arrived, hovered around for some minutes and then withdrew. Some minutes later it returned and started shelling residential houses.

It went away again, and about 2 minutes later a helicopter gunship arrived and started firing at residents. There was pandemonium in the village and everyone was running helter-skelter. As I’m talking to you, an unexploded bomb is stuck in a destroyed silo in the community and there is fear that it could detonate.”

He said they used to see jets striking armed bandits’ bases around the area. He said there was a time when the jet hit Tankala  camp in Rukudawa district in the local government. However, he said they never expected to be attacked by the jet.

The defence minister also clarified that the statement accusing some traditional rulers in the North West of colluding with bandits was not meant to discredit them.

In a release by his spokesman, Colonel Tukur Gusau, the minister said “the statement was meant to serve as a warning to some community leaders and their surrogates. This is based on security reports available to the Ministry of Defence and cannot be divulged to the general public.