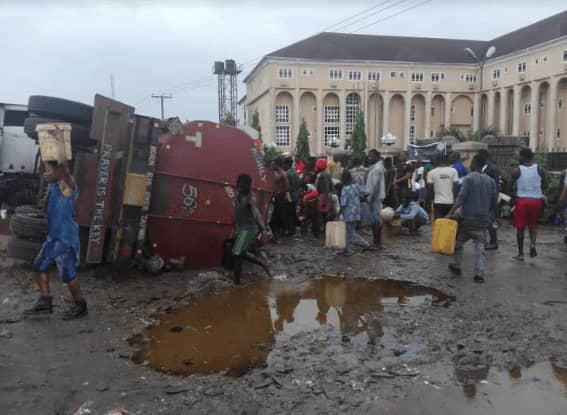 Residents in Owerri, the Imo state capital put their lives at risk on Sunday when then trooped out to scoop kerosene from a tanker that fell along Port Harcourt road at Hospital Junction in Owerri.

An eyewitness who introduced himself as Kelechi, told Vanguard that the incident happened at about 03:45pm, adding that the tanker laden with kerosene product, skidded off the road while trying to dodge a bad spot on the road.

He further said that few minutes after the incident occurred, residents noticed it was kerosene and rushed to their respective houses to bring different sizes of containers to scoop the product.

Kelechi, said that both shop owners, Okada riders as well as taxi drivers who were at the scene took part in the scooping excercise.

He said: “When it was about to fall many of us were shouting and very unfortunate the driver could not control his stirring very well that is how the tanker fell down.”

“At first we thought it was fuel. All the people there at the hospital junction brought their containers and pack their own kerosene. Some got three containers.”

Another eyewitness, Mr Emma, confessed, “My sister succeeded in bringing home, two gallons and at least it will be enough for us in the next two weeks. I will not say it is good because anything can happen as they were doing it.”

As of the time of filling this report, there was no casualty.

Telephone calls were also made to the Imo state Police Relations Officer, PPRO, Orlando Ikeokwu, who confirmed the incident and said that his men have been drafted to the scene to forestall any danger as well as to prevent the residents from coming close to the tanker.

1 thought on “Imo residents risk their lives as they scramble to scoop Kerosine from a fallen tanker!”