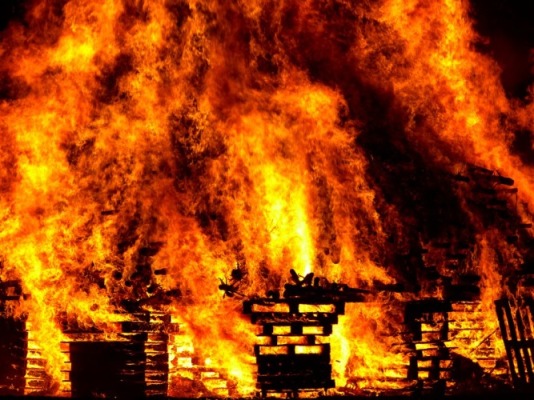 A jilted lover reportedly set girlfriend’s family members ablaze, and ended up killing 5 out of 8 members of the family at their Ondo residence.

The incidence reportedly took place at Adetuwo Street, Igbodigo town, in the Okitipupa Local Government Area of Ondo State. The three members of the family who survived the attack, are receiving treatment at the Trauma Centre, Ondo town, Ondo State.

Punch reported that the the suspect who is on the run, Deji Adenuga a.k.a. Dakar was dating a lady identified as Titi. However after she called off the relationship, the jilted lover reportedly set his girlfriend’s family members ablaze in their apartment.

“What happened today (Tuesday) was shocking. The man (Adenuga) almost wiped out an entire family early this morning. He was angry because the girl (Titi) he was dating said she was no more interested in the relationship. In order to deal with the girl, he poured petrol in the room where all members of her family were sleeping and set them ablaze.

“He actually missed his target because the girl was not in the room at the time he set the room ablaze. Eight members of the family were severely burnt. Five of them have been confirmed dead, while the remaining three were rushed to the Trauma Centre, Ondo, where they are receiving treatment” a source said.

He reportedly fled the town after the act and his whereabouts is unknown to residents. Ondo State Police spokesperson, Mr Femi Joseph who confirmed the incident said the police had begun investigation into the incident.

“We are on the trail of the suspect, while investigation has commenced into the matter. We will soon arrest him,” Joseph said.