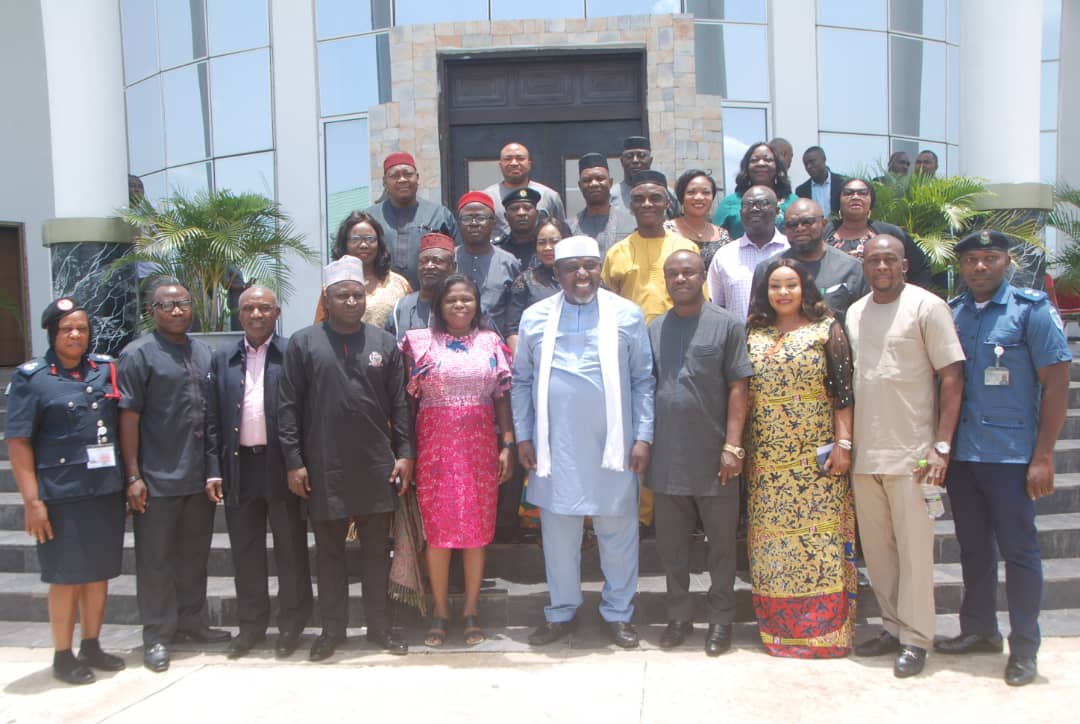 Governor Rochas Okorocha has made an appeal to the Imo State Governor-elect, Rt Hon Emeka Ihedioha to strive to continue the Free Education policy initiated by the out-going administration and ensure to keep alive and continue the over one thousand projects he undertook between 2011 and 2019.

The governor made the appeal when the new manager of Sam Mbakwe International Cargo Airport, Mrs. Rejoice Ndudinachi paid him a Courtesy call with her management team at the Government House during the weekend.

Okorocha who advised the new management to totally free the airport from the activities of touts, Stated that the airport is one of the best in the Country where touting is still known to be at its barest minimum.

The governor told them that the idea of touts making travelers uncomfortable by demanding money from them must stop because when you don’t give them it looks as if you have committed an offence.

He remarked “Our Cargo Airport is better than all other ones we have in the Country because of facilities. Maybe in Lagos, I don’t know how much of Cargo shades they have. So, Imo is blessed in this regard and we are hoping to start with MT II or Boeing 727 which has been approved to land in Owerri from outside the Country”.

“I have talked to the management of Customs, and they will soon post people there to help our operations and commence the activities of the Cargo airport. I might not start the flights coming in and going out, but I do hope that the in-coming government should continue from where I stopped. What I am praying now is let there be Continuity in Imo as I bow out on 29thMay”.

Speaking on the Rescue Mission Free Education Policy, Okorocha said, “My appeal has remained that there are certain things I would want to remain continued. One of them is the free education. I want to appeal to the in-coming government in the name of God not to stop free education in this land. Free education represents our indirect empowerment to the widows and the poor in the society. Free education helps children who cannot afford School fees. Free education has helped wipe away the tears of suffering widows.”

“Free education must never be allowed to stop in this land and if that stops, criminal activities will come back again in geometrical progression and crime rate will rise and that should not be good for the State. If they do not know how to do it, I will offer my services free of charge to be sure that free education continues in Imo State. And for the peace we are enjoying now to continue, the youths must continue to be made useful”, he stated.

He further stated “Another appeal is that all these over 1000 projects I have given to the people of Imo State, the highest in the history of this State, those things must be kept alive and made to continue. When I see these, I would be the happiest former governor of Imo State.”

“You can see that since we assumed office in 2011, the story of Imo Airport has changed. We used to have one flight per day when I came in but today, the passenger’s in-flow and out-flow in Owerri is probably the highest in the South-East. And this is because of the developmental strides we have introduced in Imo State.”

“I intend to write a book one day to explain to the people of Nigeria and Imo State in particular the vision with which I governed this State. If you should notice, I have opened up Owerri. Owerri is so opened up with road networks everywhere. There are more developments now in Owerri than it has never been. Security is better. So when I said Imo must be better, I meant my word abinitio. In security, Imo is better than it has ever been. The issue of kidnapping is gone”, he Stated.

“So, I’m leaving a better Imo than I met it. The idea of the Imo International Airport was to connect Imo State to the rest of the world. When the business starts, it would be perhaps one of the greatest legacy Rescue Mission has left for generations yet unborn.”

In her speech earlier, the new Airport Manager, Mrs. Ndudinachi said she was happy with what she saw at the Cargo terminal and assured that she would work hard to maintain the Airport to International Standard. She commended the governor for making the airport an International Cargo airport.”