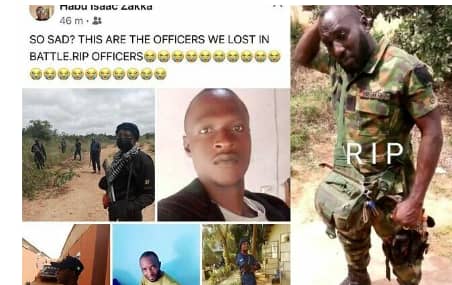 Security operatives were killed by bandits on revenge attack in Kaduna state.

The security operatives murdered on Sunday, January 8, include those of Nigeria Security and Civil Defence Corps, police, army as well as members of vigilantes.

According to one source: “The attacks were not only on Sunday but started four days ago. There was an attack along Funtua Birnin Gwari road where many securities were killed. But that of yesterday (Sunday), two vigilante members, one police and a soldier were killed.”

Information gathered showed that trouble started when the security operatives allegedly murdered a boy who normally cared for cattle owned by the bandits.

Triggered by rage for what they considered an attack, the bandits stormed a check-point known as Aka along Birnin-Gwari to Kakangi/Randagi road of the Western part of Birnin-Gwari LGA in large number and sent some of the security operatives to their early graves.

A resident named Abubakar Kakangi spoke to journalists on Monday, saying the bandits have an agreement with the members of the communities where they allowed the local residents to farm.

According to Kakangi, the bandits usually passed through the villages to sell stolen cows which the security agencies frowned at before the boy who “was looking after their cattle” was allegedly killed three weeks ago.

“Three weeks ago, the security killed a boy who was looking after their cattle. The bandits were not happy over the murder of the local boy. Thus yesterday (Sunday) the bandits stormed Aka security checkpoint along Birnin-Gwari to Kakangi/Randagi road of the Western part of Birnin-Gwari LGA,” Kakangi explained.

He continued, “The attack took place around 2:00 pm. The bandits divided themselves into two groups and carried out the attack simultaneously at the two villages where they killed scores of security personnel including the Civil Defence Corps, police, vigilante and soldiers.”

Neither the Kaduna state Police Command nor the State Government released any official statement of confirmation.

Nevertheless, friends have taken to social media to grieve over one of the NSCDC operatives, Shamsudeen Labaran, who was killed in the attack.

Some comments of grief over Labaran:

“Dear Shamsudeen Labaran if your spirit is still with us, know that you died for a good cause, you died serving your father Land, even though sometimes it seems undeserving, you were planning to leave and face another career, Birnin Gwari/Nigerian has happened to you,” one wrote.

“Oh i wished I replied your message few days ago, you always had a word for me, you never seized to call me bestie, you were a definition of a true Muslim, COE blessed me with an amazing personality such as you, you will always remind me of our PES dance

“I kept viewing our pictures this morning, hoping that it’s fake news. Kai, let’s pray for our country so many things needs to be put in place, yesterday my team mate from Gabon was calling me for a challenge she needed me to solve at 12am, i was shocked to know that she was trecking home at that time of the night,I asked, why didn’t you drive home, ain’t you scared? It’s damn late, her response melted my heart …

“She said Boss, “This is not Nigeria, everything hear is organised, as am talking to you many people are on the streets, no day, no nights, everyone minding his business, steady power supply and many more things she listed, you do your activities as convenient as possible…

“Here in my country, you are being followed and killed right in your home….my Friend, your only offence is accepting to serve your father’s land, now your vibrant life is cut-off, your family may even have to suffer to get your entitlement.