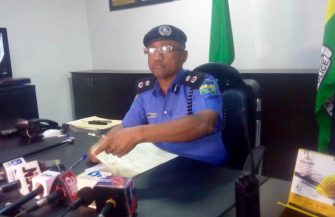 The Police Command in Imo state has confirmed the arrest of five members of a child trafficking syndicate who allegedly sold a six-hour-old baby for N850,000 shortly after he was born.

The Commissioner of Police in the state, Rabiu Ladodo, who paraded the suspects at the command’s headquarters in Owerri, described the crime as “absurd and irritating.”

The police commissioner also stated that the suspects would be charged to court at the conclusion of investigation.

The CP noted that it was unbelievable that the mother of the newborn, Chinonye Oparaocha, 23, conspired with the other suspects to trade the child after delivery.

The other suspects are Confidence Anyanwu, 28; Duru Christian, 38; George Iyowuna, 38 and William Cynthia, 44.

Ladodo said the mother of the baby conspired with a nurse at the hospital where she was delivered of the baby to take the child to Rivers State, where he was trafficked for N850,000.

According to him, it took coordinated intelligence from his men for the baby to be recovered and the suspects arrested.

The CP explained that at Port Harcourt, Christian in company with Iyowuna, met them and took custody of the baby.

The CP said the suspects had given useful information to the police, adding that efforts were ongoing to arrest other fleeing members of the gang.