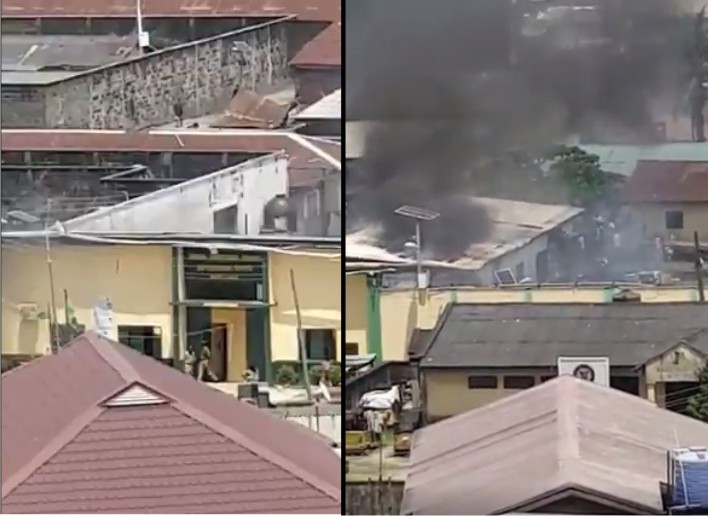 Officers of the Nigeria Police Force as well as Nigeria Army have stormed the Ikoyi Correctional Centre in an attempt to stop a jail break.

A video captured by an eyewitness shows smoke billowing from parts of the prison while inmates are seen running.

It was learnt that the prison authorities had immediately notified the police and the military authorities for backup.

Speaking of the incident, an eyewitness, who wished to remain anonymous, said, “I can see them from my balcony at the moment. Soldiers and policemen have arrived. I saw prisoners throwing stones and I saw fire.

The Police Public Relations Officer, Lagos State, Mr. Muyiwa Adejobi, said the cause of the fire could not yet be ascertained but policemen had been deployed in the prisons.

“We don’t know the cause of the fire but we are there on the ground. We have mobilised to the place. We will give details later,” he said.

Meanwhile, the Lagos State Governor, Babajide Sanwo-Olu, has disclosed that the Federal Government has deployed more security forces to guard public assets and properties in the state.

This is to prevent further destruction of public infrastructure and looting in Lagos State by hoodlums following the escalation of the #EndSARS protests.

This disclosure was made by Sanwo-Olu, on Thursday morning October 22, 2020, during an interview on Arise TV.

He also he has not been able to directly speak with President Buhari on the violent nature of the protest in Lagos, but revealed that the Chief of Defence Staff, Gen Abayomi Olonisakin and the Chief of Army Staff, Lt Gen Tukur Buratai, called him on the phone on Wednesday.

He said the two security chiefs asked to deploy more troops to secure public assets and help to maintain law and order in the state.