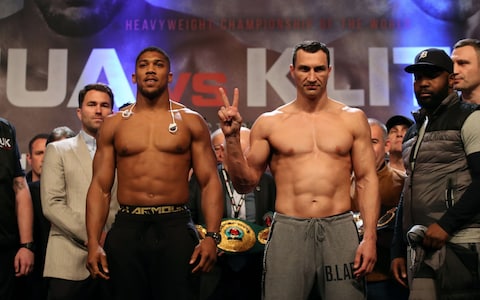 The retired heavyweight champion, Wladimir Klitschko is contemplating a sensational return to boxing.  For that, he has been in talks with Anthony Joshua over a potential rematch.

The former heavyweight world champion hung up his gloves after being stopped by Joshua in a epic clash at Wembley last year, but now seems tempted by the possibility of getting a second bite at the cherry amid uncertainty over the Brit’s next opponent.

Joshua had his heart set on a blockbuster clash for all the marbles against Deontay Wilder in the spring next year but now finds himself in no man’s land with the WBC champion keen to restart negotiations with Tyson Fury following their controversial split-decision draw in Los Angeles earlier this month.

Joshua’s promoter Eddie Hearn is narrowing down the list of options as they look for a credible name to put in front of the unified champion at Wembley on April 13 and claimed that Klitschko is keen to throw his name into the hat.

Hearn told iFL TV: ‘He wants to come back. I think he text AJ and said: “I wanna come back, I feel like I beat everybody in the division right now.” Any attempts to lure Klitschko out of retirement over the past year had fallen on deaf ears but the Ukrainian now appears to be seriously considering it with a shot at redemption on the cards.