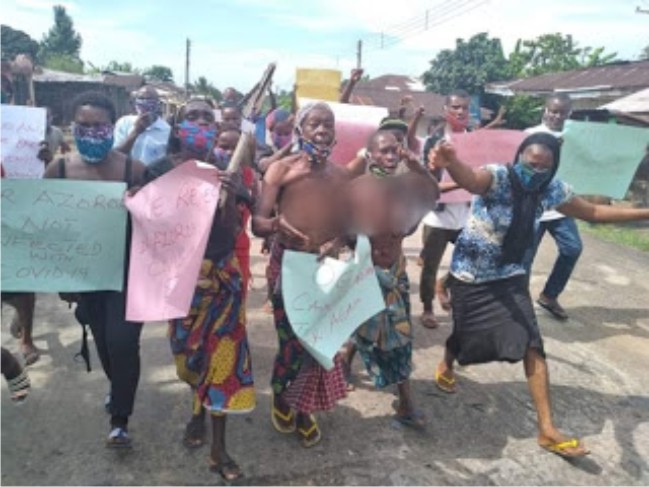 Women of Ogoni extraction took to the streets today to protest the continued detention of the Manager of Prodest Hotel, Bariledum Azoroh.

The women who took to the streets half-naked on Tuesday, called on the Rivers State Government to release the hotel manager with immediate effect, threaten to go fully naked if their son is not released tomorrow.

The owner of the demolished hotel, Promise Gogorobari, had on Monday accused the Governor of Rivers state, Nyesome Wike, of infecting the manager with covid-19.

Gogorobari who disclosed this in a statement said his manager was very healthy before his arrest, noting that it is medically impossible that the infection occurred before his detention.

The hotel was demolished two weeks ago for allegedly violating the Executive Order of the state government.

The Rivers State Government had on Sunday announced that the hotel manager was among the 27 new covid-19 cases recorded in the state.

Meanwhile a Magistrate Court sitting in Port Harcourt had last week fined the Manager the sum of 50 thousand naira for violating the Executive Order of Governor Wike on hotel closure.

Senior Magistrate RITA OGUGUO while delivering her judgment also ordered that the manager should be sent to the isolation center at Elekahia for 14 days.

The Senior Magistrate also directed that he should undergo a coronavirus test to ascertain his COVID-19 status.

The Court said the manager was convicted after contravening paragraphs 3 and 4 of the Executive Order number seven of the State Government under the Quarantine Regulations.

But Gogorobari said: “The Rivers state government and governor of Rivers state must be held liable for infecting my manager who is in their custody for over 15 days with COVID-19.

“He was a very healthy person before his arrest. It is therefore medically impossible that the infection occurred before his detention. It is a known fact that I and the Rivers state government are at daggers drawn over demolition of my hotel.

“The whole world should be aware that governor Wike wants to kill my manager to convince the public that infected persons were in the hotel all in an attempt to justify his illegal demolition of the hotel on the 10th of May 2020. The society should therefore be concerned just as I am worried”.

See more photos from the peaceful protest below.