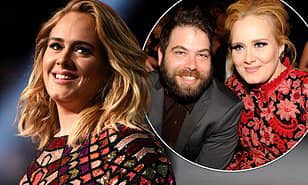 Adele has reportedly ‘divorced’ her estranged husband Simon Konecki after it was claimed the pair had been ‘living separate lives for years’.

The Hello hitmaker,confirmed she had separated from her husband of three years, in an official statement released earlier this month.

Reports surrounding the breakdown of Adele’s marriage came amid claims she was spotted kissing a ‘Simon Konecki lookalike’ in New York following her split. It is being reported that She’s been telling friends that the marriage is done and dusted.

According to reports: ‘Adele is a strong woman and is determined to get on with her life, like any normal person who is getting over a marriage break-up.’

‘She has developed a real soft spot for American guys since living in LA and had a kiss with a very handsome gentleman in a New York bar. He had a big beard like Simon, but it was tidier and more groomed.

‘They’re getting to know each other better but Adele is by no means looking for anything serious.’

The insider added that the award-winning singer is focused on raising her son Angelo, six, who she shares with ex Simon. The singer and her ex confirmed their separation last week after an eight-year relationship and three-year marriage.

And now it has been reported that Adele and Simon had been ‘living separate lives for years’ and ‘accepted that something just isn’t going to work.’