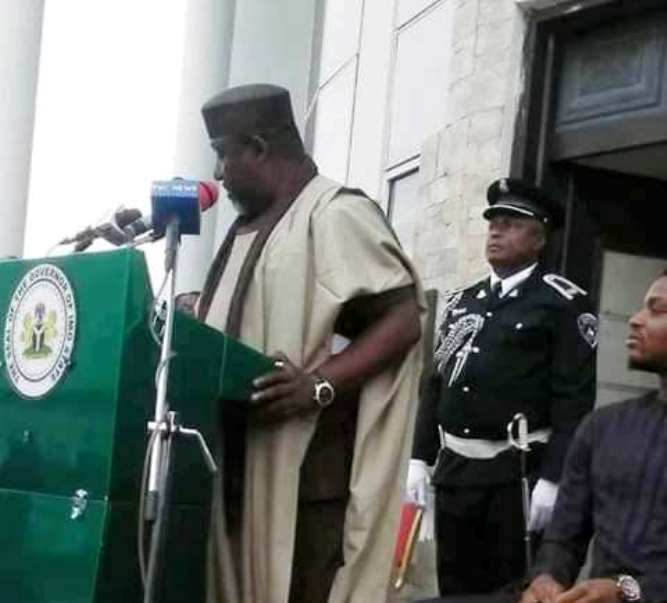 Governor Rochas Okorocha has said that his tenancy in Imo State Government House where he has lived in the past eight years as governor has expired and also his governorship, stating that whatever has a beginning must have an end.

The governor also stated that he enjoyed the wonderful support of Imo people as their governor for eight years adding that some of the elite who had certain reservations about his administrations must have had their reasons, adding that he has done very well as the governor of the State for eight years.

The governor spoke at an event to mark his Pull-out from the Government House on Tuesday, May 28, 2019 stating that many Governors had come before him and many will come after him too.

His words “To God alone be the glory for a great day like this. The day ordained by him alone to mark the end of a journey. Today, nature has permitted that we must shut down in line with the Constitution of the Federal Republic of Nigeria. This would be my last speech as Governor of Imo State, speaking from the Government House of Imo State. In a few minutes from now, these doors at the back will be shut behind me, and that would mark the end of my Certificate of Occupancy of this building”.

He stated “I have often said to people that I’m but a tenant who has come on a Rescue Mission, knowing that one day, my tenancy would be over. Let me inform all of you Imolites that my tenancy is over. And under the Constitution of the Federal Republic of Nigeria, I cannot stay any day longer than tomorrow (Wednesday). This has gone a long way to confirm that for every journey that has a beginning, would have an end, and for every sunrise, there must be a sunset. This is what life has bestowed on all of us and I’m here to just say one thing to all of you – to say THANK YOU”.

He continued “I say thank you because many governors have been here before me and many will come after me. But I must dire say that I have gotten such an unusual support from the people of Imo that has never been recorded in history. I’m grateful, thank you once more. But, it’s important that I look back 8 years ago and my journey in Imo State. For those of you who have lived here for the past 8 years, will join me quickly in this my analysis”.

He remarked “I came to Imo State in 2011 as your Governor, being elected by you all. And I promised one thing that I will make Imo better, and I declared Imo must be better. And I said to all of you that I’m coming on a rescue mission and rescue mission connotes that I would do things not the proper way of doing things, in other words, I would do everything I can to fix things right because I saw what is called an emergency situation in infrastructural development, education and the rest of them,

“This has explained perhaps why most people do not understand my style, because they believe that I brake protocols. I never broke any protocol, I simply bend the protocols to get me on my way to fix things. Some say that I broke the law, but there’s no known law in Nigeria that I have broken. What I do is to smartly bend it, when its about to brake I simply leave it to get the job done. I have not followed the routine culture of bureaucratic bottlenecks which have kept our State and nation in bondage,

“I do things the other way and I get results in all I did. But one thing is pivotal to the governance of Imo State. And its that I came with a vision and my mission was quite clear and I came with an added passion to deliver my vision”.

“Today, I’m proud to announce to you looking 8 years down the lane that Imo is indeed better than I met it in all ramifications. I recall vividly in 2011, when darkness ravaged our City Owerri and at about 7 O’clock nobody would make a move out of the fear of being kidnapped. Today, Imo is a secured State,

“I present to you while I leave, a secured Imo State. I recall those days when children could not go to schools for lack of School fees, both in Primary, Secondary and University, and couldn’t afford to buy their books, 8 years later, we are proud to announce that education is free for the past 8 years and no child pays for school fees or worry about how to go to school. I present to you a free education State as I walk out of this Government House,

“Most of you may know that our Urban Renewal has changed the face of Owerri and our City is looking better than it has never been and Owerri is the fastest growing City in the Federal Republic of Nigeria. We are proud to say so. 8 years down, you will agree with me that we have built so many infrastructure that have not been recorded in the history of Imo State. I accept criticisms and many might criticize me, but one thing they can’t take away from me is that I came, I saw and I conquered.

“But my speech this evening is not to enumerate my achievements, but to communicate to you the Imo State that I’m about to handover and the challenges because as my brothers and Sisters, we have a great state called Imo where our people are highly industrious and willing to work. But we have one challenge, and the challenge is that our elites do not help matters whenever it comes to the issue of progress in this land.

“I’ve raised the bar and the bar is high, and the shoes are quite big. Again to most people who have been so disillusioned, people who felt they have no reason to forge ahead, let me announce to you that I came here with good intention, and I’m leaving here with the best of intention.
Let me announce to my political enemies, they should stop because they have no justifiable reason to fight me. Rather, if they think they can fight me, let them demonstrate it in the pace of work. But let me announce again and again, I’m a lover of peace, but as I work out of this Government House, let none fight me and I won’t fight anyone. Governorship is a shield that covers every personality that is in office, but when you remove this shield or this mask off my face, you will see the real Rochas”.

1 thought on “My tenancy in Government House is over, let nobody fight me – Okorocha”