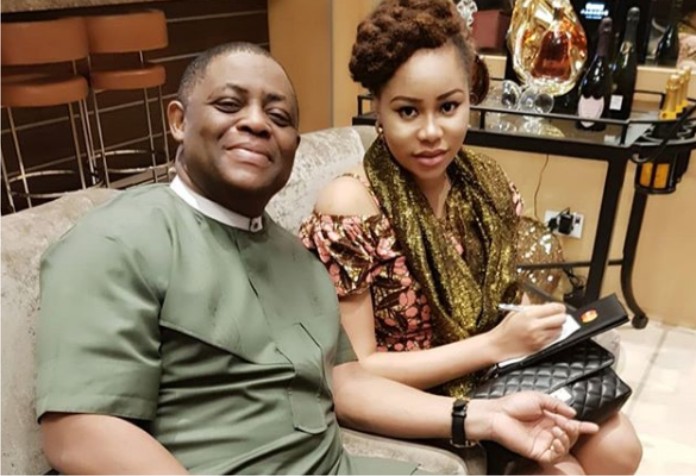 More reports have emerged over the crises rocking the marriage of former Minister of Aviation, Femi Fani Kayode and his wife, Precious Chikwendu.

Yesterday, controversial investigative journalist, Kemi Olunloyo said the couple have separated because of the deteriorating mental health of Precious Chikwendu. She even said that Precious was diagnosed with Bipolar depression and Schizophrenia. Read more here.

However, new reports Blogger Stella Dimokorkus claim that Fani Kayode and his wife Precious parted over extreme domestic violence. FFK was accused of constantly beating up his wife.

The Insiders confirm that Precious moved out months ago but without her four sons as the former Minister took over the kids and put them under the care of a Nanny with strict instructions that Precious is not to come near the house they shared as a couple. In fact, she is allegedly forbidden to go near the house.

According to the insiders, as she moved out, the former Minister took back the car gift and all the goodies he ever bought for her whilst they were married and has left her broke as her accounts were seized as well, both are presently not on talking terms except the stinkers and threats sent on whatsapp.

She also allegedly got beaten up many times when she was pregnant with her first son and the triplets.

She allegedly lived like a prisoner in the house and was not allowed to go out,if she must go out,she went without the boys as it was alleged she might run away with them.

Insiders say every time they post on the social media, “just know that they just settled a quarrel or someone got whooped and they settled”

The insider adds that ”the situation between both of them is serious and he has told her she would never see her kids again.

The former Minister also allegedly called Doctors who take care of mad people and alleged precious was a mad woman and they forcefully removed her pant and gave her injections and she was allegedly locked up for some months before she was released and ran.

It is also alleged that Precious recently tried to commit suicide over trauma.

We are surely yet to see the end of this drama and will update you as more reports emerge.