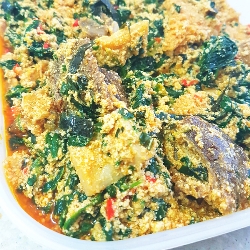 The Egusi plant is often confused for Watermelon plant. The shelled seeds of egusi are usually coarsely ground and used in preparing soup, stew and snacks.

At the mention of this soup, many will salivate as it is much-loved by many Nigerians. However, you must hold that saliva and know the danger therein in consuming too much Egusi.

According to a nutritionist from the Head of Dietetic Department, University College Hospital, Ibadan Egusi contains something called phytosterols which when consumed, compete with cholesterol for absorption in the digestive system.

Also, he stated that, egusi has a high level of calories and when garnished with few chunks of stock fish and two pieces of meat, it has a total of roughly 700 calories per serving. Imagine consuming it with about 3 wraps of ‘eba’ which is about 600 calories this makes up of 50% fat and can speedily lead to weight gain with excess intake.

The highest fat group in Egusi is linoleic acid( 67 to 73%) which is an omega 6 fatty acid. Excessive amounts of these vegetable oils, or linoleic acids , can contribute to inflammation and result in heart disease, cancer, asthma, arthritis and depression, which is one reason you need to keep your consumption moderate.

If Egusi is not properly stored, it may be infested with fungi. Consumption of fungi infested seed may lead to food poisoning with aflatoxin. Aflatoxins are a family of toxins produced by certain fungi that are found on agricultural crops.

So, when next you decide to take a plate of egusi soup, know you should not take it in excess because it can cause your body harm.