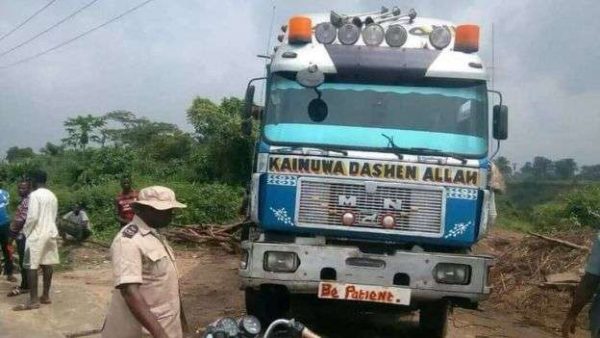 A fatal accident has reportedly led to the death of a pregnant woman in the early hours of Wednesday, January 9, 2018 at Molete, Ibadan.

It was reported that a truck crushed the lady whose leg slipped as she was about to cross to the other side of the road, and also injured two other men. According to eyewitnesses, the deceased and the men were trying to beat the oncoming truck by running across the road to the other side, but the pregnant woman fell in the process and was crushed to death.

The lady’s corpse has been evacuated and deposited in the morgue of the Oyo State Specialist Hospital, Adeoyo, by officials of the Federal Road Safety Corps. Onijala, a Deputy Route FRSC Commander, further disclosed that the driver of the DAF 85 truck which had no number plate, has been arrested and detained by the police.