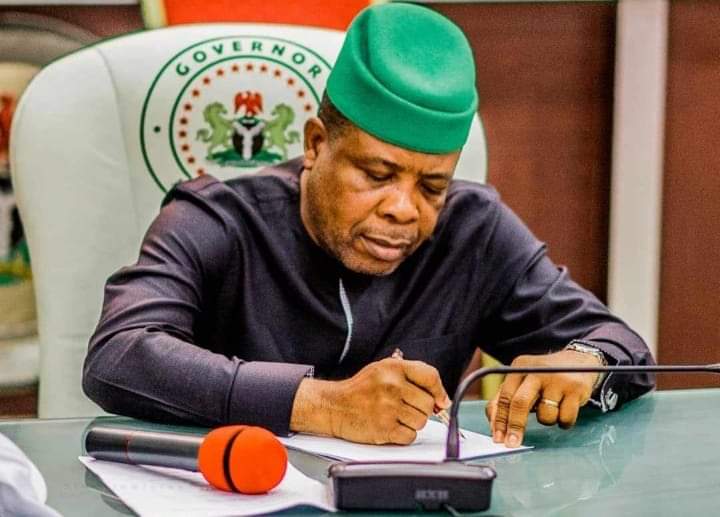 A former Secretary to the State Government of Imo, Uche Onyeagucha has reacted to a claim by the Imo state government that former Governor Emeka Ihedioha borrowed N3.5 billion naira in September 2019 and did not account for the sum.

In a statement released on Sunday, 24th October, Onyeagucha said that the allegation was “a cheap smear campaign deliberately intended to stir controversy and assassinate the esteemed reputation of His Excellency, Rt. Hon. Emeka Ihedioha CON and his Rebuild Imo administration.”

He further stated that it was a desperate antic “aimed at diverting attention of the public, from the total collapse of governance in Imo State occasioned by the ineptitude of the Senator Hope Uzodinma led administration.”

While denying the allegations, Onyeagucha said, “For the avoidance of doubt, the Rebuild Imo Administration of Rt. Hon. Ihedioha neither took any loan of N3.5Bn from either Fidelity bank nor acquired land from communities as claimed by the peddlers of the falsehood.”

He went on to offer clarification, saying:

For the benefit of Ndi Imo and all;

(1) There was the Central Bank of Nigeria (CBN) empowerment scheme known as the Accelerated Agricultural Development Scheme (AADS) and the Commercial Agricultural Credit (CAC) Scheme, which the Ihedioha administration sought to facilitate for the benefit of Imo Entrepreneurs.

(2) These schemes involve granting of soft loans to beneficiaries usually for financing agribusiness and micro-enterprises.

(3) As can easily be verified from the CBN website, these intervention schemes are implemented by the Apex bank through Deposit Money Banks. The role of a State government is only to facilitate and provide the necessary guarantee often by way of Irrevocable Standing Payment Order.

(4) As a development oriented government committed to youth empowerment and job creation, our administration sought to take advantage of these concessional facilities for Imo Youths and entrepreneurs.

(5) In order to make it transparent and accountable, charasteric of our administration, the government set up an inter-ministerial Committee chaired by the Commissioner for Finance.

(6) This Committee selected Fidelity Bank based on its agribusiness promotion track record as the bank to warehouse the funds following eventual disbursement by the CBN. The bank would also be involved in credit assessment and monitoring of projects to be financed with the facility from CBN.

(7) A visit to the CBN website shows that these schemes come with pre-conditions which include identification of viable projects as well as selection of beneficiaries whose names must be submitted to the CBN via the participating financial institution.

(8) Following due approval by the State Executive Council, the critical stage of project identification and selection of eligible beneficiaries were ongoing when the administration was wrongfully terminated

(9) The process put in motion following the approval of Council was, therefore rendered inconclusive.

(10) Fidelity Bank can easily confirm that it never received any N3.5 billion from the CBN in favour of the government of Imo State.

(11) We encourage anyone who has evidence to the contrary to make it available to the public. (12) The facts stated above can easily be verified from the Development Finance Department of the CBN. We expect the present administration to seek guidance on how to complete the process for the benefit of Ndi Imo rather than resort to cheap blackmail.

It is important to state that we have taken cursory notice of the orchestrated blackmail, sponsored by Senator Hope Uzodinma against Rt. Hon. Emeka Ihedioha. These efforts have failed and amount to nothing. Ndi Imo are wiser.

The Rebuild Imo Administration still stands tall and acclaimed for its strict compliance to due process, transparency and accountability. It is on record that during the period, Imo State was listed by the National Bureau of Statistics (NBS) as the Least Corrupt State in Nigeria.

Suffice to note that Sen. Uzodinma has neither made effort to respond with details, to the enquiries of fiscal management nor weighty allegations of corruption levelled against him and his government. We expect him to follow the standard we have set without delay.